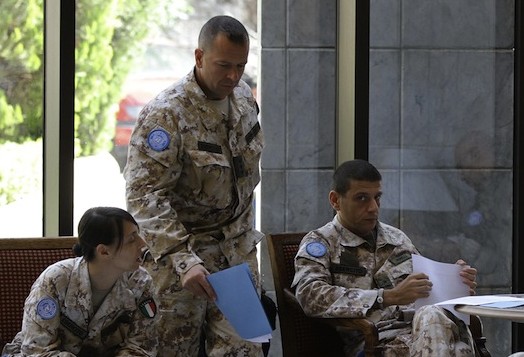 Members of the UN Supervision Mission in Syria (UNSMIS) prepare to leave their Damascus hotel on a monitoring mission May 16, one day after a convoy of UN truce observers came under bomb attack in a Syrian town during a funeral procession. (Louai Beshara/AFP/GettyImages)
Middle East

United Nations military observers were forced to stay in the northern Syrian town of Khan Cheikhoun after their vehicles were damaged in a bomb blast.

“None of the observers were injured or hurt, they stayed in the area overnight and they were able, this morning, to leave and go back to their headquarters in Hama,” Hassan Siklawi, a spokesperson with the U.N. observers in Syria, said in an interview, according to a U.N. statement on Wednesday.

Three of the vehicles in the convoy were damaged after an improvised explosive device, or IED, detonated on Tuesday.

The observers stayed with members of the Free Syrian Army, according to a commander, Abu Hassan, who told Al-Jazeera: “We gave the six with their cars to a U.N. convoy near the entrance of Khan Sheikhoun. They are all safe, in good heath and on their way to Damascus.”

The observer mission was sent to Syria to oversee a ceasefire between the Syrian regime and opposition fighters that neither side have really followed. The architect of the peace plan and ceasefire, Kofi Annan, recently admitted that both sides have attacked one another.

The opposition Local Coordination Committees network reported that 32 people, including a child, were killed on Wednesday, with another 21 killed on Tuesday.

The Syrian Observatory for Human Rights paints a more grim picture, saying that 63 people were killed on Wednesday alone, with at least 28 civilians slain in the northern city of Idlib.