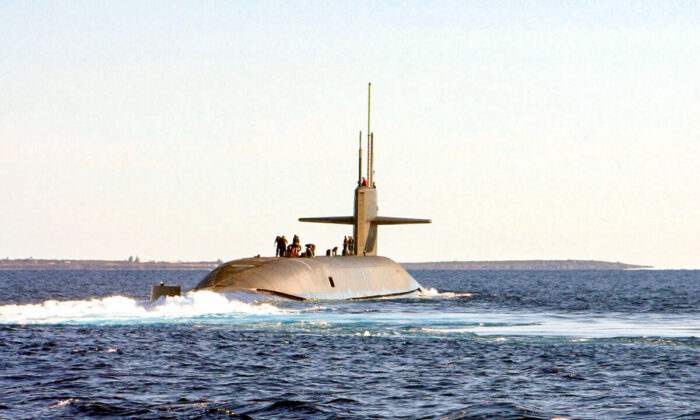 A nuclear propulsion Ohio class submarine, the USS Florida sails on Jan. 22, 2003 off the coast of the Bahamas. Australia as part of the AUKUS deal will get the tech for nuclear powered subs. (David Nagle/U.S. Navy/Getty Images)
Australia

Australia’s Foreign Minister Penny Wong has reaffirmed the country’s commitment to nuclear non-proliferation after a meeting with the head of the International Atomic Energy Agency (IAEA) on July 4.

Rafael Grossi, head of the IAEA, was in Adelaide, where he met with the Australian foreign minister to discuss the international security environment, nuclear proliferation risks from regimes in North Korea and Iran, as well as safeguards around the impending AUKUS deal between Australia, the United States, and the United Kingdom.

“I reiterated Australia’s total commitment to our obligations under the Treaty on the Non-Proliferation of Nuclear Weapons and the South Pacific Nuclear Free Zone Treaty,” Foreign Minister Wong told AAP after the meeting.

“I reaffirmed Australia’s commitment to working transparently and openly with the IAEA to ensure our acquisition of nuclear-powered submarines sets the highest possible non-proliferation standards.”

Grossi said after the meeting that Australia’s commitment to non-proliferation reassured him.

“We must ensure that whatever is done in this area will not—will never—run counter to the basic principle of preventing nuclear weapons proliferation,” he said in comments obtained by the Australian Broadcasting Corporation.

Under the AUKUS deal, Australia will become one of the few nations—and the only non-nuclear weapons power—in the world to control nuclear-powered submarines.

The deal was signed off in September 2021 under the previous Morrison government to counteract Beijing’s aggression in the immediate region. The move to upgrade Australia’s navy does place the country in a grey area under the IAEA’s safeguards.

The safeguards are designed to monitor the use of nuclear materials around the world to prevent their implementation in weaponry.

Yet they do not cover the use of nuclear materials for naval propulsion—a situation designed to prevent the sharing of top-secret technology between countries.

Grossi last year said the AUKUS agreement was “very tricky” to deal with, but it could be managed.

“A country … is taking material away from the inspectors for some time, and we are talking about highly, very highly enriched uranium,” he told the BBC’s HardTalk programme on Sept 24, 2021.

“What this means is that we, with Australia, with the United States and with the United Kingdom, we have to enter into a very complex, technical negotiation to see to it that, as a result of this, there is no weakening of the nuclear non-proliferation regime.”

He further told the Australian Broadcasting Corporation that because nuclear-powered vessels were underwater for months on end, IAEA inspectors would be unable to access the submarines. In turn, the AUKUS partners would need to find ways to ensure regular inspections could be carried out to satisfy non-proliferation obligations.