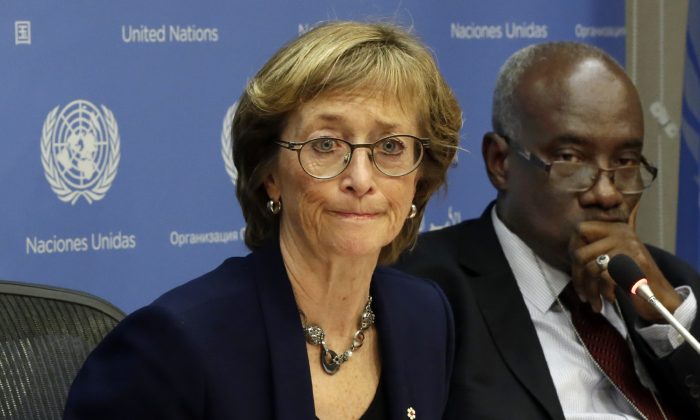 Canadian judge Marie Deschamps (L), chair of the Independent Review Panel on U.N. Response to Allegations of Sexual Abuse by Foreign Military Forces in the Central African Republic, is joined by panel member Hassan Jallow at a news conference at the United Nations on Dec. 17, 2015. The U.N.' "gross institutional failure" to act on allegations that French and other peacekeepers sexually abused children in the Central African Republic led to even more assaults, according to a new report released Thursday. (AP Photo/Richard Drew)
Africa

The U.N. is asking the countries to immediately investigate, as nations are responsible for holding their own troops accountable in such cases.

The new allegations follow a series of sexual abuse allegations against U.N. peacekeepers last year in Central African Republic, which has suffered years of sectarian violence. Last month, an independent panel’s report sharply criticized the U.N. response to the allegations, saying it failed to properly vet peacekeepers for past abuses and needed to do more to protect children.

The U.N. said Tuesday that a fact-finding mission is under way.

The U.N. does not name countries whose peacekeepers are accused in sexual misconduct, under pressure from member states, but U.N. Secretary-General Ban Ki-moon has said he intends to start doing so this year.

Ban last year announced his intention to repatriate the troops of countries that don’t act on allegations of sexual misconduct.

At least two of the allegations were related to a displaced persons camp in the capital, Bangui. A statement Tuesday by the peacekeeping mission in Central African Republic said mission chief Parfait Onanga-Anyanga stressed the need for patrols in such camps in collaboration with local security forces.

“There is no place in U.N. peacekeeping for those who betray the trust of the people we are here to help,” Onanga-Anyanga said Tuesday.