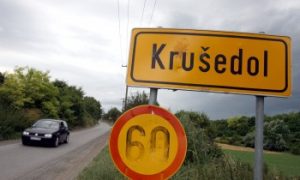 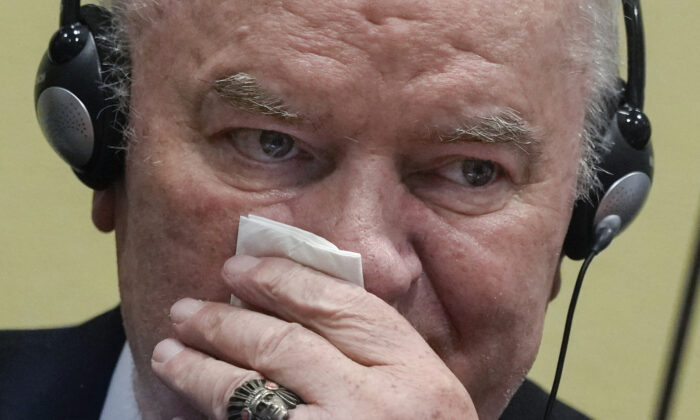 Former Bosnian Serb military chief Ratko Mladic sits in the court room in The Hague, Netherlands, where the UN court delivers its verdict in the appeal of Mladic against his convictions for genocide and other crimes and his life sentence for masterminding atrocities throughout the Bosnian war, June 8, 2021. (Peter Dejong/AP Photo)
Europe

THE HAGUE, Netherlands—UN appeals judges on Tuesday upheld the conviction of former Bosnian Serb military chief Ratko Mladic for genocide and other offenses during Bosnia’s 1992–95 war and confirmed his life sentence.

The ruling means the 79-year-old former general who terrorized Bosnia throughout the war will spend the rest of his life in prison. He is the last major figure from the conflict that ended more than a quarter-century ago to face justice.

Presiding Judge Prisca Matimba Nyambe of Zambia said the court dismissed Mladic’s appeal “in its entirety” and affirmed his life sentence. It also rejected an appeal by prosecutors of Mladic’s acquittal on one other count of genocide linked to ethnic purges early in the war.

Once a swaggering military strongman known as the “Butcher of Bosnia,” Mladic appeared upbeat as he entered the courtroom, mimicking photographers as he sat down, but he scowled as the judgment was read and showed no emotion when he heard that his appeal had been rejected in its entirety.

Mladic commanded troops responsible for atrocities ranging from “ethnic cleansing” campaigns to the siege of Sarajevo and the war’s bloody climax in the 1995 Srebrenica massacre. Now, he is a frail elderly man whose ill health delayed this final judgment.

His toxic legacy continues to divide Bosnia and his dark shadow has spread far beyond the Balkans.

To Serbs in Bosnia, he is a war hero who fought to protect his people.

“I cannot accept any verdict,” Serb war veteran Milije Radovic from the eastern Bosnian town of Foca told The Associated Press. “For me, he is an icon. And for the Serb people, he is an icon.”

To Bosniaks, mostly Muslims, he will always be a villain responsible for their terrible wartime suffering and losses.

Mladic was first indicted in July 1995. After the war in Bosnia ended, he went into hiding and was finally arrested in 2011 and handed over to the International Criminal Tribunal for the former Yugoslavia by the then-ruling pro-Western government of Serbia.

The judgment was welcomed as “an important affirmation of the rule of law” by Kathryne Bomberger, director-general of the International Commission on Missing Persons that helped to locate victims of atrocities in Bosnia.

“An important chapter in the history of international justice and the history of the Western Balkans conflict closed today,” Bomberger said. “Ramifications of the judgment in case of Mladić and in previous cases, such as that of Radovan Karadzić, go beyond the Western Balkans. This gives hope to survivors of atrocity, including families of the missing and disappeared persons around the world, that justice can be delivered.”

The shadow of Mladic and Karadzic spreads far beyond the Balkans. They have also been revered by foreign far-right supporters for their bloody wartime campaigns against Bosniaks.

The Australian who shot dead dozens of Muslim worshippers in Christchurch, New Zealand, in 2019 was believed to be inspired by the wartime Bosnian Serb leaders, as well as Anders Breivik, the Norwegian white supremacist who shot dead 77 people in Norway in 2011.

The UN tribunal has since shut its doors. Mladic’s appeal and other legal issues left over from the tribunal were being dealt with by the UN’s International Residual Mechanism for Criminal Tribunals, which is housed in the same building as the now-defunct court for the former Yugoslavia.