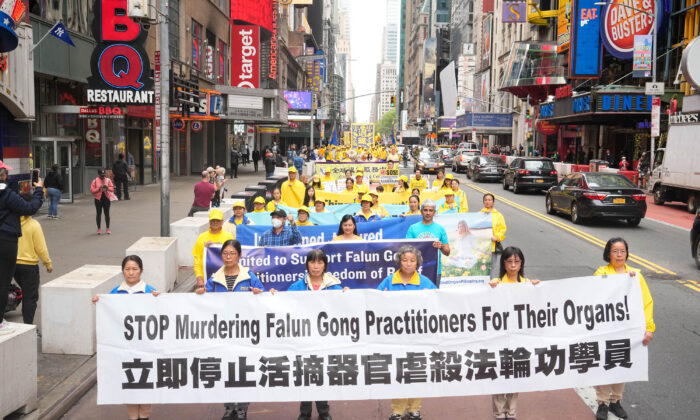 Falun Gong practitioners take part in a parade marking the 30th anniversary since its introduction to the public, in Manhantan, New York City, on May 13, 2022. (Larry Dye/The Epoch Times)
Organ Harvesting in China

The appeal made by Washington-based advocacy group Doctors Against Forced Organ Harvesting (DAFOH) on May 6 came ahead of Bachelet’s planned trip to China scheduled for later this month.

“Forced organ harvesting from living people specifically to sell their organs for profitable transplant surgeries is among the most egregious crimes against humanity conceivable,” the group said in a press release.

“In 2006, allegations were raised of the brutal persecution of Falun Gong, a peaceful spiritual discipline that follows the principles of truthfulness, compassion and tolerance whose adherents are subjected to the industrialized practice of organ harvesting throughout China’s military and civilian hospital systems,” it continued.

Falun Gong, also known as Falun Dafa, is a spiritual discipline with meditative exercises and moral teachings. It grew in popularity during the 1990s leading to up to 100 million people practicing in China by the end of the decade. Perceiving this to be a threat, the Chinese regime in 1999 launched a nationwide campaign seeking to eradicate the practice.

Millions of Falun Gong practitioners have been detained in jails and detention facilities across the country, where they are subjected to torture and forced organ harvesting.

Since 2006, a “plethora” of research, investigation and testimony about Beijing’s organ transplant abuses have emerged, DAFOH said, all of which were reviewed by a 2019 independent panel.

The London-based China Tribunal concluded that the Chinese regime had for years been killing prisoners of conscience for their organs for transplant on a substantial scale, a practice that’s still going on. It concluded that such actions amounted to crimes against humanity and that the main victims were detained Falun Gong practitioners.

DAFOH, in particular, called attention to a recent resolution adopted by the European Parliament expressing “serious concerns” about reports of “persistent, systematic, inhumane and state-sanctioned organ harvesting from prisoners in the People’s Republic of China, and, more specifically, from Falun Gong practitioners and other minorities such as Uyghurs, Tibetans and Christians.”

The resolution also called for the Chinese regime to cooperate with U.N. organizations on this matter and for the “UN Human Rights Council to deal with the issue of forced organ harvesting as a matter of priority.”

The Chinese regime has persistently denied allegations of organ harvesting, but has also refused to allow outside access to medical and detention facilities to properly probe the matter.

Between 2012 and 2018, DAFOH organized a global petition campaign to the U.N. High Commissioner for Human Rights demanding that they call upon China to immediately stop the forced organ harvesting and to conduct further investigations.

More than three million people from over 50 countries and regions signed the petition, the group said.

Forced organ harvesting from prisoners of conscience is “an apparent form of punishment, and indeed a tool of genocide meant to cull minority populations deemed ‘undesirable’ by the state,” Smith said during a May 12 hearing of the House’s Tom Lantos Human Rights Commission.