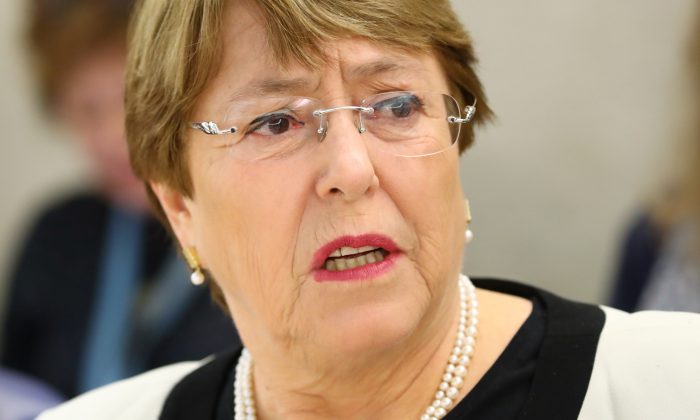 United Nations human rights chief Michelle Bachelet said on March 6 that she is seeking access to China to verify continuing reports of disappearances and arbitrary detentions, particularly of Muslims in the Xinjiang region where some one million ethnic Uighurs and other Muslims are in facilities human rights advocates call mass detention camps.

“My Office seeks to engage on this issue with the Government for full access to carry out an independent assessment of the continuing reports pointing to wide patterns of enforced disappearances and arbitrary detentions, particularly in the Xinjiang Uighur Autonomous Region,” Bachelet said.

It was her second appeal in six months at the U.N. Human Rights Council, where China’s delegation is expected to respond later this week.

Some reports indicate that over one million Uighurs from the Xinjiang region are being held in so-called re-education camps, where they are forced to deny their faith and pledge allegiance to the Chinese Communist Party. Other Uighurs are subject to constant online surveillance and the collection of vocal samples, iris scans, and DNA sampling.

Bachelet’s request is not the only one China is facing from the United Nations. U.N. investigator on religious freedom Ahmed Shaheed revealed on March 5 his request to visit Xinjiang, made in February, to look into serious concerns over its “de-extremification” law.

The Chinese regime claims its de-radicalization program is in place to crackdown on “absurd teachings” from extremists in the Xinjiang region. It has not yet responded to the U.N. investigator’s request.

Shaheed, a former Maldives minister, and several other U.N. rights experts also wrote to Beijing last November voicing concerns over its ‘de-extremification’ law. They are concerned that China’s regulation targets religious minorities as well as Kazakh nationals in a “crackdown on the exercise of fundamental rights in Xinjiang.”

“There have been allegations of deaths in custody, physical and psychological abuse and torture, as well as lack of access to medical care,” the letter says.

David Anderson, Canada’s Shadow Cabinet Secretary for Human Rights and Religious Freedom, outlines some of these allegations in a series of videos on religious persecution in China. Citing a Human Rights Watch report, he says some of the reasons why Uighurs could be detained include owning a tent, speaking with someone abroad, praying, or listening to religious lectures.

Furthermore, in Southwest Xinjiang where 80 percent of the population is Uighur, there are places with four to five checkpoints per kilometer, the highest concentration of checkpoints in China, Anderson says. In Han-majority regions, there are little to no checkpoints.

Testifying before of the Canadian Subcommittee on International Human Rights, founder of the Uyghur Canadian Society Mehmit Tohti said in 2018 that the Uighur identity was being indiscriminately criminalized by the Chinese regime.

“China is now sealing off the entire region, cutting off communication in and out, and building hundreds of concentration camps that hold millions of Uighurs without any charges or any terms of release,” said Tohti, who was born in Xinjiang Province in China and now lives in Toronto.

He called on the Canadian government to condemn the crisis in Xinjiang.

An investigative report from 2006 found that a significant source of harvested organs in China came from Falun Gong prisoners of conscience. Prior to 2014, the Chinese regime claimed that organs were coming from prisoners who had been executed or from voluntary donations. The report found that the rate of organ transplants far exceeded China’s official claim of 10,000 organ transplants per year, and that the source of these organs was likely from the systematic organ harvesting of Falun Gong adherents.

In an updated report released in 2016, the researchers estimate that as many as 60,000 to 100,000 transplants took place in China from 2000 to 2015, with the vast majority of victims being practitioners of the Falun Gong meditation practice.

In 2015, Chinese authorities claimed that organ harvesting had ended. However, the 1984 law which permits organ sourcing from executed prisoners without the consent of the donor or the family still exists. The Chinese regime has rejected any allegations of forced organ harvesting.