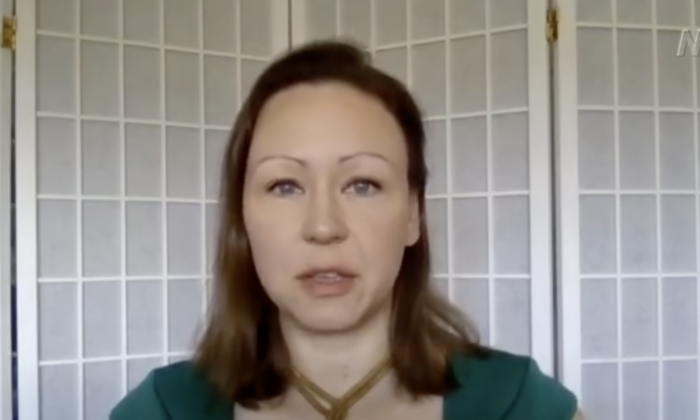 Director of Research at the Center for Family and Human Rights, Rebecca Oas, in interview with NTD Capitol Report, June 21, 2022. (NTD/Screenshot via The Epoch Times)
Social Issues

“And to the extent that there is consensus among nations, it’s that the laws on abortion and the protection of the unborn, is for countries to determine for themselves, and not a matter for an international human rights mechanism,” Oas said during an interview with NTD Capitol Report. “The fact that she’s weighing in on this issue at all, is an expression of her stepping outside of her mandate here.”

In mid-June Bachelet gave an update on global human rights developments at the 50th Human Rights Council session in which she praised pro-abortion laws in South America but said she is alarmed by the setback to women’s reproductive rights in the U.S.

”I welcome the decision of the Colombian Constitutional Court in February to decriminalize abortion, following positive developments globally, including most recently in Argentina and Mexico regarding these rights,” said Bachelet.  “This is a time for progress, not further restrictions on these essential rights,” said Bachelet, referring to the overturning of Roe versus Wade by the Supreme Court.

The court, in a 6–3 ruling powered by its conservative majority, upheld a Mississippi law that bans abortion after 15 weeks of pregnancy and overturned Roe. Chief Justice John Roberts concurred with the court’s conservatives, but argued that he would have upheld the Mississippi law without taking the additional step of erasing the Roe precedent altogether.

Abortion activists have been staging protests in front of conservative justices’ homes, pushing the limits of what is legal and the Biden administration’s Dept. of Justice has failed to curb these protests.

Many legal experts say the protestors are violating Title 18, Section 1507 of the U.S. Code of 1950. Under this law, it is illegal to picket or parade in front of a courthouse or a judge’s home “with the intent of interfering with, obstructing, or impeding the administration of justice, or with the intent of influencing any judge.”

The protestors have been threatening the justices, and since the ruling have continued disruptive and sometimes violent protests. Oas said this Supreme Court ruling on abortion is very consequential, with other countries possibly following suit.

“So of course, what we do is going to set a large example to the world, and it might embolden other countries to double down on their protections for life in the womb, which is what we would hope to see. But of course, we also have seen that the debate over abortion around the world is going to affect us in more immediate ways,” said Oas.

Oas agrees with Bachelet that women will try to obtain abortions illegally if they are made illegal in their state, and one of the immediate effects could be a rise in women seeking pills, as a way to terminate a pregnancy Oas said.

“We’ve already seen the rise of this in the U.S. where there are overseas organizations that are selling abortion pills to women here in the United States. Now, of course, this is not in keeping with our laws and policies, but it nevertheless is happening, and we can expect to see more of this,” said Oas.