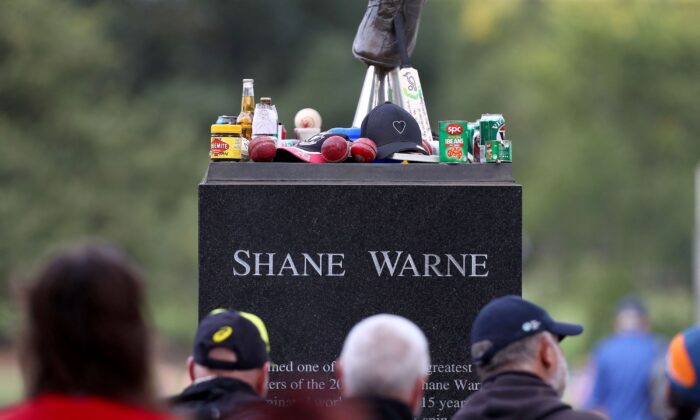 People gather around the statue of Shane Warne before the state memorial service for the former Australian cricketer Shane Warne at Melbourne Cricket Ground (MCG) in Melbourne, Australia, on March 30, 2022. (Aaron Franic/AFP via Getty Images)
Australia

Australian cricket great Shane Warne’s legacy will live on beyond his sporting achievements, with his animal conservation work for the United Nations to be honoured with a new grant.

At a state memorial service in Melbourne on Wednesday, Andrea Egan from the UN Development Programme revealed Warne joined its wildlife fund, Lion’s Share, in 2021.

“His legacy extends beyond the hearts of the people here today,” she told the crowd at the Melbourne Cricket Ground.

“It lives on in the people of Sri Lanka promoting sea turtle conservation, in an all-female anti-poaching unit in South Africa, and the team at the Byron Bay hospital, who were supported in the wake of the bushfires.

“All this work and more, Shane helped make possible. We are forever grateful for his championship and will work to honour his memory in a manner that does justice to the person he was.”

Warne had a history of charity and community work, including through his disbanded foundation, but his links to wildlife conservation were previously unknown.

The cricket legend, who died in Thailand of a suspected heart attack on March 4, was remembered during Wednesday night’s farewell as a loveable larrikin and devoted dad.

His father Keith Warne led tributes and described his son’s death as the “darkest day in our family’s life.”

Friend and former St Kilda footballer Aaron Hamill gave an insight into Warne’s larrikin nature, when the cricketer served as his best man and leaned in for a hug just before the nuptials.

“He said ‘mate, it’s not too late’ and, Shane being Shane, he pulled out two passports. He managed to get his hands on my passport as a bit of a gag,” Hamill said.

Warne’s everyman appeal was on full display outside the ground as his statue once again became adorned with beer cans and baked beans—two of his other great loves.