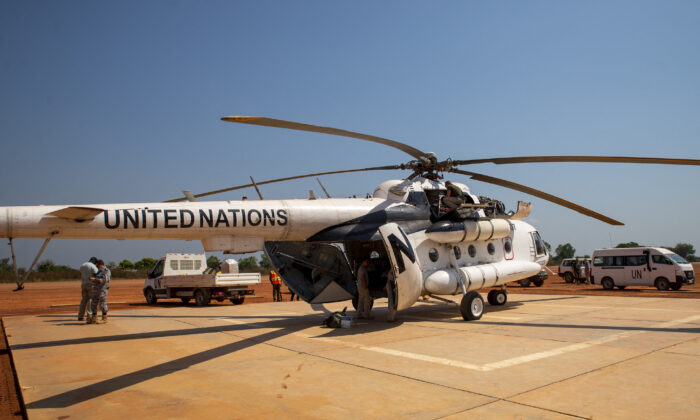 A United Nations (UN) helicopter, operated by the United Nations Multidimensional Integrated Stabilization Mission in Central African Rrepiblic (MINUSCA) staff which is flown for short distances due to the threat of explosive devices, lands in Paoua, on Dec. 2, 2021. (Barbara Debout/AFP via Getty Images)
World

The helicopter shot Monday was among two carrying out reconnaissance for the U.N. mission in Congo, according to a statement from Congo’s army on Tuesday. Those on the helicopter were assessing the movements of communities that had been attacked by a rebel group in order to coordinate humanitarian assistance.

Congo’s forces and the U.N. are searching for the helicopter and potential survivors, the army said.

The eight people on board the Puma helicopter included six crew members—all from the Pakistani military—and two military personnel, one from the Russian Federation and one from Serbia, U.N. spokesman Stephane Dujarric told reporters in New York.

He confirmed the helicopter was there to monitor the situation where there had been fighting, but asked for patience as to the cause of its crash.

Pakistan’s military issued a statement with the names of the six officers and soldiers on the helicopter, saying they “have embraced martyrdom.”

“Pakistan has always played a pivotal role as responsible member of the international community to help realize ideals of global peace and security through” U.N. peacekeeping missions, the statement said.

Eastern Congo is prone to insecurity as several armed groups are vying for control its mineral-rich lands. In 2012 the M23 rebels controlled large areas of eastern Congo, including the provincial capital of Goma. The rebels were eventually pushed from eastern Congo into Uganda and Rwanda in 2013 by Congolese and United Nations forces.

Despite ongoing efforts to disarm the group, M23 rebels have recently increased their attacks in the region.

U.N. Special Representative for Congo Bintou Keita told the U.N. Security Council on Tuesday that the security situation in Congo has, since December, “deteriorated despite military operations carried out by the Congolese security and defense forces under the state of siege.”

Civilian deaths and displacements have increased, she said, primarily due to bloody reprisals by the Allied Democratic Forces rebels against civilians living in the North Kivu and Ituri provinces.

“In the past three months, we have seen an alarming increase in activities by the M23 rebel movement in North Kivu,” including Monday’s attacks targeting civilians in communities near Rutshuru, she said. New fighting is also taking place in the three-border region, near the border town of Bunagana.