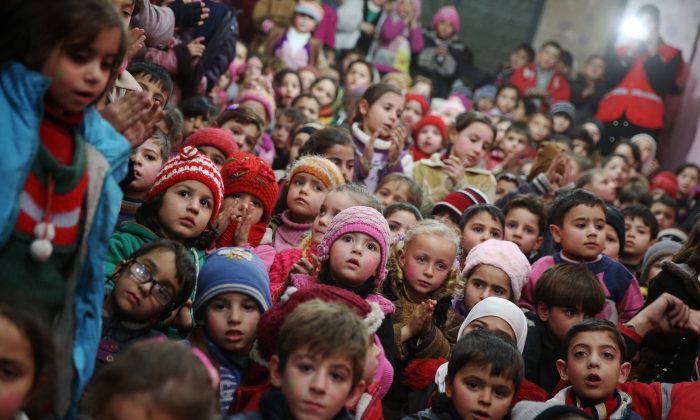 Syrian children attend an event organised by the Syrian Arab Red Crescent for New Year's eve celebrations in a rebel-controlled area of Arbeen, on the outskirts of the capital Damascus, on Dec. 31, 2015. (Abd Doumany/AFP/Getty Images)
International

UNITED NATIONS—Donors have pledged $250 million to educate over one million Syrian children this year but an additional $500 million is urgently needed to fund the program in Turkey, Lebanon and Jordan, the U.N. envoy for global education said Tuesday.

Gordon Brown warned that “death voyages to Europe” will soar in 2016 as long as Syria’s two million refugee children and millions more displaced inside the country are exploited and don’t have the opportunity for education.

The organization Girls Not Brides recently reported that the child marriage rate among Syrian refugee girls has doubled from 12 percent to 26 percent, he said, and a recent survey estimates that one in three refugee boys and girls have become child laborers.

“It’s urgent that we provide them education and avoid this exploitation and give these children hope for the future,” Brown told a news conference by audio link from Europe.

When he was Britain’s prime minister in 2009 and head of the Group of 20 leading economies, Brown recalled that a trillion dollars had to be raised to support the world economy, so “it ought to be possible to raise $500 million for what is an excellent cause.”

He pledged to try to raise the money at the World Economic Forum in Davos and an international pledging conference for Syria in London on Feb. 4.

Brown said Lebanon’s introduction of double-shift classes in school has been the greatest success story, educating over 200,000 refugee children from Syria right now “from a negligible number a few months ago.” The refugee youngsters go to school in late afternoon and evening, after Lebanese children are finished, he said.

“And by next year every single child refugee would be offered a place in school whether they be in Lebanon, Jordan or Turkey,” Brown said.