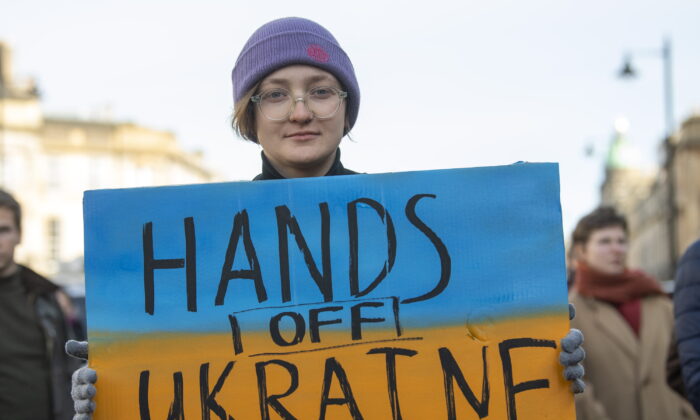 People take part in a demonstration outside the Russian Consulate General in Edinburgh on Feb. 26, 2022. (Lesley Martin/PA)
World

Condemns Decision to Invade as 'Deplorable'
By Allan Stein

The United Nations General Assembly approved on March 2 a resolution denouncing Russia’s invasion of Ukraine while calling for an immediate and peaceful withdrawal of all troops.

The vote was 141 to 5, with 35 of the body’s 193 members abstaining. It was the first time the assembly convened an emergency session since 1997.

Assembly resolutions aren’t legally binding, but they do have clout in reflecting international opinion.

A Russian veto sank a similar resolution of the more powerful U.N. Security Council on Feb. 25, but the assembly allows no vetoes.

Under special emergency session rules, a resolution needs the approval of a two-thirds majority of those countries voting, and abstentions don’t count.

In the resolution, the assembly condemned Russia’s “Aggression against Ukraine,” and reaffirmed the “paramount importance” of the U.N. in the “promotion of the rule of law among nations.”

It “deplored” Russia’s aggression “in the strongest terms,” and demanded an immediate withdrawal of all Russian forces from Ukraine’s internationally recognized borders.

The measure condemns the Feb. 24, 2022, declaration by the Russian Federation of a “special military operation” in Ukraine.

It expressed “grave concern” at reports of attacks on civilian facilities, residences, schools, and hospitals, as well as civilian casualties.

The resolution also recognizes that the military operation inside Ukraine is “on a scale that the international community has not seen in Europe in decades and that urgent action is needed to save this generation from the scourge of war.”

Belarusian President Alexander Lukashenko, addressing the U.N. Security Council in a session on March 1, said that signs of the West’s preparations for war against his country and Russia were apparent.

“On the pretext of dealing with the migration crisis in neighboring countries, a military group was created ostensibly for protecting the border from an illegal influx of immigrants. That group exceeded 30,000,” Lukashenko said, according to the BelTA news agency.

“The Ukrainian army launched exercises in the Polseye region for training its troops for an operation in the Belarusian direction and started arming nationalist groups with the same aim,” he said.

In public comments, Russian President Vladimir Putin has said that the key objectives of the days-old military operation are “de-Nazification” and disarming Ukraine’s military.

Since the start of the conflict, Putin has increased the nuclear readiness of its forces, a decision which the U.N. General Assembly also condemned in its resolution.