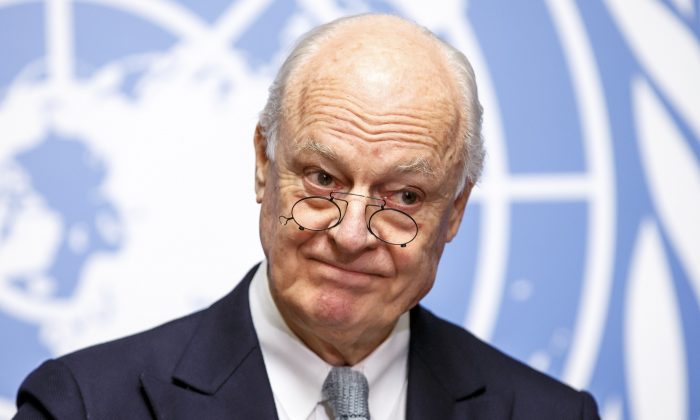 U.N. Special Envoy of the Secretary-General for Syria Staffan de Mistura informs the media on the Intra-Syrian Talks, during a press conference, at the European headquarters of the United Nations in Geneva, Switzerland, on Jan. 25, 2016. (Salvatore Di Nolfi/Keystone via AP)
International

GENEVA—Lowering expectations about his ability to help end Syria’s civil war, the U.N. special envoy announced talks between government and opposition representatives will start on Friday to embark on a six-month process that he hopes will include civil society and women’s groups.

Staffan de Mistura raised nearly as many questions as he answered in a news conference in Geneva on Monday, the day when talks had originally been set to begin before tensions over who would be invited, involving countries like Russia and Turkey, forced a delay. He also confirmed comments from U.S. Secretary of State John Kerry last week that the two main sides won’t meet face-to-face initially in the “proximity” talks.

De Mistura insisted he was sticking to Security Council decisions to shun some groups like the Islamic State (ISIS) and al-Qaida-affiliate Nusra Front, but refused any clarification beyond that. He said invitations would go out Tuesday, but declined to specify his criteria about deciding who receives them.

“We want to make sure that when and if we start, to start at least on the right foot,” said de Mistura, who succeeded Kofi Annan and Lakhdar Brahimi as the top U.N. envoy for Syria. “It will be uphill anyway.”

The step-by-step approach testifies to the immense difficulties that many diplomats and world powers have faced in efforts to end the nearly five-year war that has cost more than 250,000 lives, forced millions to flee their homes to places like Europe, and opened the way for ISIS to seize vast territory in Syria and Iraq.

“The first priority will be the focus of the talks of what most Syrians—if not all—want to hear: The possibility of a broad cease-fire, and the possibility of stopping the threat of ISIL, and therefore, thanks to a broader cease-fire, an increase of humanitarian aid,” he said, using another acronym for ISIS.

Learning from past failures and missteps, de Mistura jettisoned an initiative of four “working groups” on various aspects of Syria’s crisis led by Europeans which he launched last summer. He also insisted the new talks didn’t amount to “Geneva III,” an allusion to earlier rounds of unsuccessful discussions.

De Mistura predicted “a lot of shuttling because there are not only different delegations but also civil society, women and others who deserve to be heard … So you could have quite a lot of simultaneous meetings taking place.”

“We want to make sure that there is a substantial presence of women to advise me and make sure we are in the right position for the future of Syria,” he added.

Russia Shows Military Might in Syria Ahead of Peace Talks

The entire process of getting the talks going has been entangled in regional power-jockeying and geopolitics: Turkey, which has long fought a Kurdish resistance group PKK, insists that some Kurdish groups who have been battling ISIS—and at times succeeding against it—must be kept out.

“There are efforts among some countries to water down the opposition. We oppose this,” said Turkish Foreign Minister Mevlut Cavusoglu in Ankara earlier on Monday. “To insist that terror groups such as the YPG (the main Kurdish militia) are included within the opposition would lead to the failure of the process. We have to insist that this is extremely dangerous.”

Russia, a rival of Turkey and key ally of Syrian President Bashar Assad, has called for the inclusion of Kurdish representatives, and the U.S. and others have supported the Kurds in the fight against ISIS. Russia and Iran consider some members of an opposition group formed in Turkey as terrorists too.

EU foreign policy chief Federica Mogherini, who spoke to reporters alongside Cavusoglu, said the EU puts “extremely high value on the fact that the process in Geneva will be inclusive,” and De Mistura said he too wanted the process to be inclusive.

Last month, the U.N. Security Council passed a resolution on the Syria crisis that set a target for the peace talks to start this month. That resolution also aims to produce credible governance and a schedule for drafting a new Syrian constitution. But airstrikes by Russia have altered the military situation on the ground.

The Implosions of International Relationships in the Mideast

The Geneva talks will be the first since discussions collapsed two years ago, but comments by Syrian opposition figures cast further doubts on the process.

Salem Meslet, spokesman for the opposition Supreme Committee for Negotiations, a Saudi-backed body, insisted the government should lift sieges imposed on several rebel-held areas around the country before any talks take off.

“We are not putting demands. We are calling for the implementation of a Security Council resolution that Russia signed,” Meslet told The Associated Press. The opposition group will hold a meeting in Saudi Arabia on Tuesday to make a final decision on whether to attend the talks.

Downplaying such preconditions, de Mistura described the talks more as consultations between groups meeting “in proximity”—a sign that even minimal progress is uncertain. He projected a long-process of shuttle diplomacy over months that begin with a two- or three-week process.

“Don’t be surprised, there will be a lot of posturing—we know that—a lot of walkouts and walk-ins because a bomb has fallen, or because someone has done an attack,” he said. “We should not be impressed, neither depressed, but it’s likely to happen. The important thing is that we keep the momentum.”