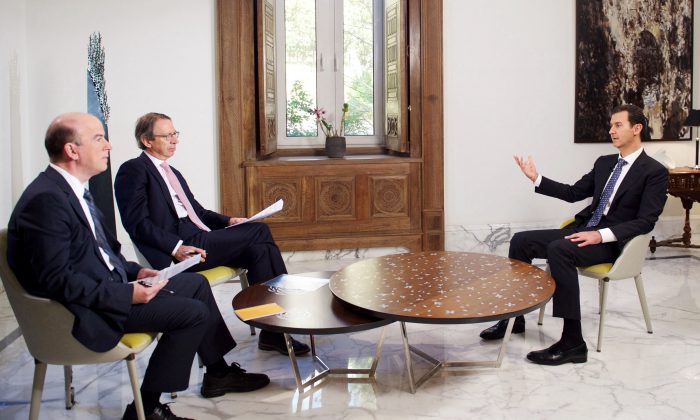 DAMASCUS, Syria — As a Saudi-Iran crisis roils the Middle East, the U.N. special envoy to Syria arrived in Damascus on Friday to lay the groundwork and prepare the peace negotiations between President Bashar Assad’s government and its opponents due later this month in Geneva.

But Syrian opposition figures insist it’s impossible to talk peace when Syrian government forces are stepping up their attacks and laying siege to opposition-held areas that leave Syrians starving to death.

Staffan de Mistura’s visit comes as the Saudi-Iranian rift has raised concerns that the disagreements between Riyadh and Tehran — who support different sides in Syria’s civil war — could derail efforts to negotiate a peace process for Syria led by the U.N., the United States and Russia.

The U.N. is urging the sides in Syria’s five-year-conflict to the negotiating table on Jan. 25 in an effort to find a resolution for the conflict that has killed more than 250,000 people and displaced half the country’s population. Conferences in Geneva in 2014 failed to bring about a settlement, though this round is seen as particularly urgent after the U.N. Security Council passed a resolution last month endorsing a transitional plan for Syria.

Its passage was a rare show of unity among global powers, which have backed opposing sides of the conflict — Russia siding with Assad and the United States saying the Syrian leader should step down. The U.N. resolution made no mention of Assad’s fate after the transitional period.

“The Saudi-Iranian escalation of tension will have effects (on Geneva talks) since they are the two main regional powers … in the Syrian arena,” said Khaled al-Nasser, a member of the main Western-backed opposition group, the Syrian National Coalition. “I am pessimistic.”

Al-Nasser said Russia has been trying to put forward names of people close to the government among the opposition’s delegation to Geneva. He was apparently referring to Damascus-based opposition groups that are tolerated by Assad’s government.

Earlier this week, de Mistura met with Syrian opposition officials in Saudi Arabia, which supports Assad’s opponents. From Damascus, de Mistura is expected to travel Sunday to Iran, which is the Syrian president’s main ally in the Middle East.

Al-Nasser said the opposition has named a 50-member delegation, including 15 who will be the negotiating team in Geneva, adding that the others will be advisers and technical experts. He said the names have not been made public because they were still waiting to see who will be representing the government.

Upon arrival, de Mistura was received by deputy Syrian foreign minister, Aymen Sossan, but his talks with Syrian officials are to start Saturday.

Another senior member of the Syrian opposition coalition, Haitham al-Maleh told The Associated Press that there can be no negotiations when hundreds of thousands of Syrians live under siege, Assad’s ally Russia is going ahead with airstrikes on opposition fighters and the government has failed to release detainees — a key opposition demand.

“Where are the confidence-building measures?” al-Maleh asked, speaking by telephone from Cairo.

In a good-will gesture by the government, Syrian authorities have said they will allow the flow of assistance to the besieged town of Madaya near the border with Lebanon where some two dozen people have starved to death.

International relief agencies are preparing to deliver food to Madaya in the coming days after reports from there shocked the world. Since July, Syrian government forces and allied militias have besieged the town, with an estimated 40,000 inhabitants.

Al-Nasser said that such gestures in the past have been “disappointing,” adding that sometimes they only allowed food enough for one week and barred deliveries of baby formula.

Meanwhile, over 200 Syrians remained stranded at Beirut’s International Airport after they could no longer fly to Turkey following a new visa regulation. Syrians used to be able to fly to Turkey without a visa, but an Ankara decree effective midnight, Jan. 8, annulled the privilege. It was published late last month, causing Syrians to scramble across the Lebanese border, heading for the Beirut airport.

Lebanese airport officials said a flight earlier Friday took 174 Syrians without visas for Turkey back to Damascus. The officials spoke on condition of anonymity in line with regulations.