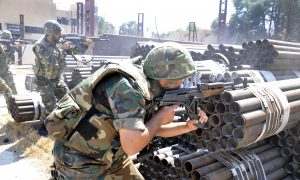 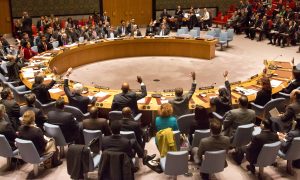 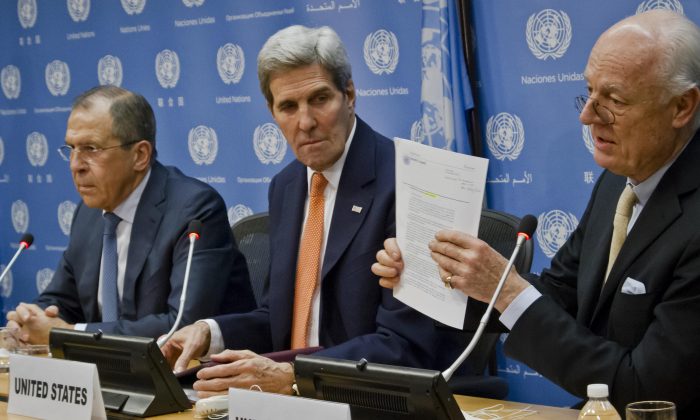 UN Endorses Peace Process for Syria; No Mention of Assad

UNITED NATIONS—The U.N. Security Council’s unanimous support of a peace process for Syria that is set to begin next month with government-opposition talks and a cease-fire represents its strongest gesture yet in support of a solution to the civil war.

The council’s adoption of a resolution Friday backing the plan comes amid world powers’ growing sense that the top priority in Syria should be the defeat of the Islamic State (ISIS), which has exploited the country’s years of chaos and created a base from which it promotes deadly attacks abroad.

U.S. Secretary of State John Kerry told reporters that the world is going to see in the next few months whether the peace process actually takes hold. He urged key powers, including top Syria allies Russia and Iran, to match their words with actions.

“Within a month or so, two months, decisions are going to have to start to be made about the devolution of some power” and the creation of a transitional body agreed to by Syria’s government and opposition with full executive power, Kerry said.

But the resolution makes no mention of the most contentious issue, the future role of Syrian President Bashar Assad. Kerry rejected the idea that Friday’s vote and discussions put off tough decisions on that issue.

The United States, its European allies, Saudi Arabia and other Arab nations have insisted that Assad must go, though Kerry said “everyone” has by now realized that demanding Assad’s departure up front in the process was “in fact, prolonging the war.”

Kerry said “sharp differences” remain on Assad and stressed that “Assad has lost the ability … to unite the country.”

Russian Foreign Minister Sergey Lavrov stressed that the Syrian people must decide their own future—and that “also covers the future of Syria’s president, and that is our deep conviction.” He told reporters that he was “not too optimistic about what has been achieved today, but a very important step has been made … for Syrians to determine the future of their country.”

Syria’s ambassador to the U.N., Bashar Ja’afari, criticized the “glaring contradictions” between the talk about letting the Syrian people decide their fate and what he called interference in his country’s sovereignty by talking about replacing Assad.

The Syrian conflict has lasted nearly five years and killed more than 300,000 people. An estimated 4 million refugees have played a large part in the migrant crisis in Europe and Syria’s neighboring countries. The U.N. says tens of thousands of people are trapped in besieged areas.

“Thousands of people have been forced to live in grass and weeds. This is outrageous,” U.N. Secretary-General Ban Ki-moon told the council before the vote. “The people of Syria have suffered enough.”

Diplomats have made clear that the blueprint the Security Council endorsed Friday will not end the fighting in Syria. Imposing and monitoring a cease-fire are impossible in areas under control of the ISIS group.

The resolution calls on the U.N. secretary-general to convene representatives of the Syrian government and opposition “to engage in formal negotiations on a political transition process on an urgent basis, with a target of early January 2016 for the initiation of talks.”

Within six months, the process should establish “credible, inclusive and non-sectarian governance” and set a schedule for drafting a new constitution. U.N.-supervised “free and fair elections” are to be held within 18 months under the new constitution.

Notably, the resolution says members of Syria’s diaspora can vote in the election, which gives more say to people who have fled the conflict.

U.N. special envoy Staffan de Mistura said invitations to the peace talks among Syrian parties will go out in January, and Kerry estimated that talks would begin in the middle or end of January.

“In January, we expect to be at the table and implement a full cease-fire,” he said.

The Security Council vote followed a meeting of ministers from 17 nations who came to New York to try to build momentum for a cease-fire and the start of negotiations. The ministers said they would meet again next month.

One key issue that lies ahead is deciding which groups in Syria should be part of an opposition negotiating team and which should be considered terrorist organizations instead.

Jordanian Foreign Minister Nasser Judeh said he presented lists submitted from each country of groups they consider terrorist organizations. He said some countries “sent 10, 15, 20 names” and others more.

A group of countries will join Jordan in developing that list, Kerry told reporters. Lavrov warned against efforts to “divide terrorists among good and bad ones.”

De Mistura is now tasked with pulling together a final negotiating team for the Syrian opposition. He was upbeat, saying “mission impossible is becoming potentially possible, thanks to what we saw today.”