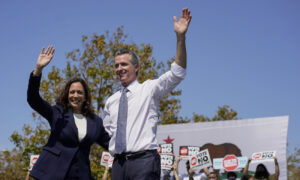 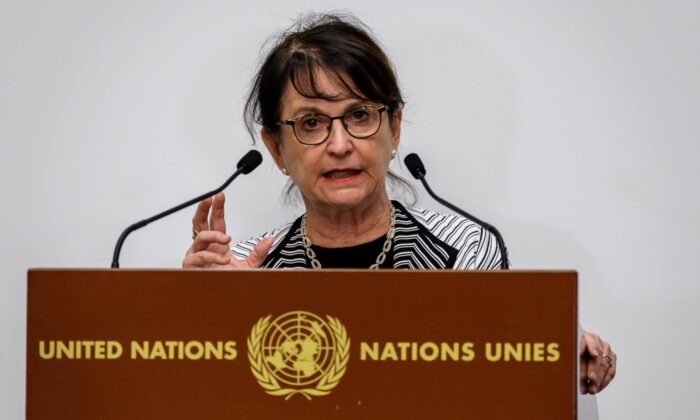 Special Representative of the U.N. Secretary-General for Afghanistan Deborah Lyons delivers a statement during the 2020 Afghanistan donor conference hosted by the U.N. in Geneva, Switzerland, on Nov. 24, 2020. (Fabrice Coffrini/AFP via Getty Images)
Afghanistan

UN Employees Face Harassment, ‘Fear for Their Lives’ in Afghanistan

United Nations employees in Afghanistan are being subjected to “harassment and intimidation” at the hands of the Taliban following the terrorist group’s swift takeover of the war-torn nation in August, according to U.N. staff members.

“We are, however, increasingly worried by the growing number of incidents of harassment and intimidation against our national staff,” U.N. special envoy to Afghanistan Deborah Lyons said in a Sept. 9 statement.

“We will continue to do everything possible to support our staff and keep them from harm’s way. The U.N. cannot conduct its work—work that is so essential to the Afghan people—if its personnel are subjected to intimidation, fear for their lives, and cannot move freely.”

An internal U.N. security document obtained by Reuters on Aug. 25 describes dozens of incidents, including veiled threats, the looting of U.N. offices, and the physical abuse of staff since Aug. 10, five days before the Taliban seized power.

Senior U.S. diplomat Jeffrey DeLaurentis told the U.N. Security Council that the United States was “outraged at reports that members of the Taliban have engaged in reprisals against U.N. staff throughout the country,” stating that such behavior is “simply unacceptable.”

Despite the Taliban recently providing assurance that they’ll respect the rights of Afghan women and present themselves as “more moderate,” a brutal clampdown against protesters in opposition to the terrorist group recently erupted at locations across the country. There are also reports of the Taliban implementing prohibitions on women’s rights.

“We are receiving increasing reports where the Taliban have prohibited women from appearing in public places without male chaperones and prevented women from working,” Lyons said.

“They have limited girls’ access to education in some regions and dismantled the Departments of Women’s Affairs across Afghanistan, as well as targeting women’s NGOs [Non-Governmental Organizations].”

When the Taliban was in power between 1996 and 2001, prior to a U.S.-led military operation two decades ago, the terrorist group banned women from the workplace and nearly all women were mostly confined to their homes. They also forbade women from leaving the home unaccompanied by a man and forced them to cover their entire bodies.

The U.N. also stressed that it’s extremely disturbed about reports of violence used against Afghan nationals protesting Sharia—or Taliban extremist rule—as well as journalists covering the demonstrations. That violence included shootings and persistent beatings, among other repressive measures, according to the U.N.

“We call on the Taliban to immediately cease the use of force towards, and the arbitrary detention of, those exercising their right to peaceful assembly and the journalists covering the protests,” a spokeswoman for the U.N. High Commissioner for Human Rights said in a statement.

A newspaper editor said two of his journalists were beaten in police custody recently after covering the women’s protest in Kabul, where they were detained by the Taliban.

Zaki Daryabi, founder and editor-in-chief of the Etilaat Roz newspaper, shared images on social media of two male reporters, one with large, red welts across his lower back and legs and the other with similar marks on his shoulder and arm.