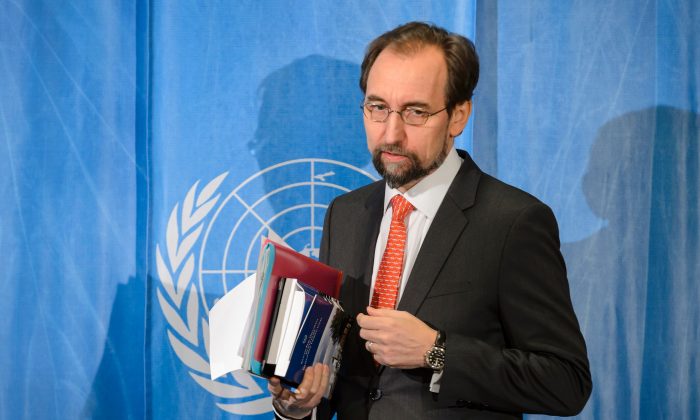 While official Chinese spokespeople were busy slamming the United Nations for drawing attention to rights abuses in the country, Chinese people did not find a great deal to criticize. Even though they were sometimes in the minority—a great deal of other users, an unknown number of which appeared to be regime-funded commentators—many flocked to the social media page of the United Nations online to show their support.

The controversy began on Feb. 16, when Zeid Ra’ad Al Hussein, the United Nations High Commissioner for Human Rights, described how the Chinese authorities arrest lawyers and intimidate dissidents and NGO workers. She called it “a very worrying pattern.”

“Civil society actors, from lawyers and journalists to NGO workers, have the right to carry out their work, and it is the states’ duty to support and protect them,” said Al Hussein in a statement.

Civil society actors, from lawyers and journalists to NGO workers, have the right to carry out their work, and it is the states’ duty to support and protect them.
— Zeid Ra'ad Al Hussein, U.N. High Commissioner for Human Rights

Since July last year over 300 lawyers, legal assistants, staff members of law firms, and social activists have been detained and interrogated by Chinese security forces. One of the most prominent lawyers, Wang Yu, was formally charged on suspicion of “subversion of state power” in January this year.

Wang Yu was one of the lawyers named by Al Hussein to be immediately released unconditionally.

In response, China’s UN envoy released a press statement calling Al Hussein’s remarks “irresponsible” and “biased,” since “all those cases raised involve illegal and criminal activities, and has nothing to do with with restriction of the rights and freedoms.” It called on Al Hussein to look at China’s human rights in a “comprehensive, objective and rational manner.”

China’s criticism of the United Nation did not end there. The next day, during the official press conference, Hong Lei, spokesperson for the Ministry of Foreign Affairs, said Al Hussein’s criticism was “baseless, unjustified and unprofessional.”Hong added “China is a law-governing nation, and everyone stands equal before the law.”

But these remarks—on the heels of what has been seen as mass illegal and extralegal security mobilization against lawyers in China—was strongly rebuked by Internet users. On Sina Weibo, the Chinese equivalent of Twitter, a user called Hong “shameless,” while another said “I admire how your face is as thick as a steel plate.”

It is hard to know whether users who expressed such sentiments were in the minority or not. A vast number of comments attacked the United Nations for “meddling” in China’s affairs—however, their argumentation and language closely adhered to the official line, and it was thus unclear how many of them were paid commentators, known as the “50 Cent Army,” which is regularly used to swarm against information critical of the regime, and create a false environment of support for the Communist Party.

“Do we have human rights here?” asked a netizen from Beijing. “Aspirin Aasipilin” from Ningxia wondered: “Once we had human rights, would the Party still be in power?”

The simple comment “support UN,” posted to the Sina Weibo page of the United Nations, received many likes from other users.