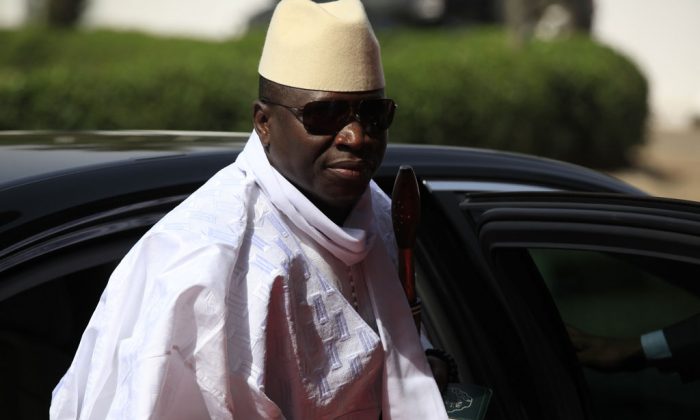 Gambia's President Yahya Jammeh arrives for a summit to address a seminar on security during an event marking the centenary of the unification of Nigeria's north and south in Abuja, Nigeria, on Feb. 27, 2014. Heavy gunfire is reported Tuesday Dec. 30, 2014, near the presidential palace in Gambia, according to local residents, raising the specter of a coup attempt while the longtime ruler is currently visiting France, state media reported. On Tuesday, soldiers linked to his presidential guard were believed to be involved in the fighting, according to witnesses who spoke on condition of anonymity for fear of reprisals. (AP Photo/Sunday Alamba)
Africa

UNITED NATIONS—The U.N. Security Council on Wednesday condemned the coup attempt “against the legal and democratic institutions” in Gambia.

Chad’s U.N. Ambassador Mahamat Zene, the current council president, told reporters after a closed-door briefing by U.N. political chief Jeffrey Feltman that members “welcomed the normalization of the situation in the country.”

Heavy gunfire rang out Tuesday near the presidential palace in the tiny West African nation while President Yahya Jammeh, who came to power in a 1994 coup when he was 29 years old, was in France. He has reportedly returned to Gambia.

Referring to reports that indicate the situation in the capital of Banjul is calm, Ban called for all parties “to exercise restraint and to refrain from further violence,” he said.

The U.N. chief encourages “a transparent investigation” into Tuesday’s events that respects human rights, due process and the rule of law, Haq said.

Zene, the council president, said Ban’s special representative for West Africa, Mohammed Ibn Chambas, will visit Gambia soon and report back to members on the situation.

Gambia is a small former British colony surrounded by Senegal on both its northern and southern borders. Human rights activists have long criticized Jammeh’s regime as repressive, charging it targets political dissidents, journalists, gays and lesbians.

Jammeh is one of Africa’s most vocal anti-gay leaders and has previously threatened to behead sexual minorities found in his country. The U.S. government recently removed Gambia from a trade agreement in response to human rights abuses, including a law signed in October that imposes life imprisonment for some homosexual acts.

Jammeh also drew swift condemnation from activists in 2007 after he insisted that HIV-positive patients stop taking their antiretroviral medications, claiming he could cure them with an herbal body rub and bananas.