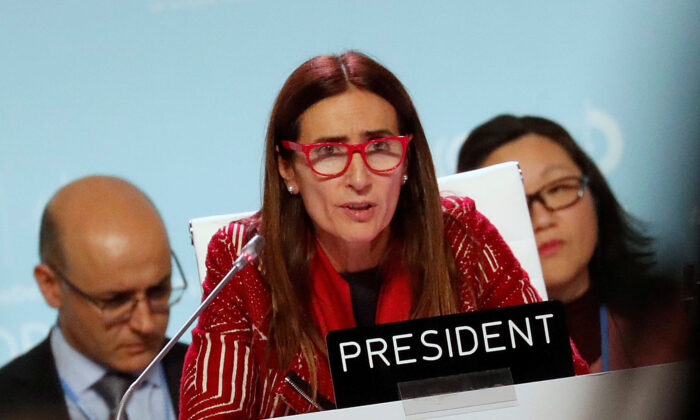 A handful of major states resisted pressure on Dec. 15 to ramp up efforts to combat global warming as a U.N. climate summit came to a delayed close.

The summit talks in Madrid, dubbed COP25, were viewed as a test of governments’ collective will for more aggressive cuts to greenhouse gas emissions. But the conference, in its concluding draft, endorsed only a modest declaration on the “urgent need” to close the gap between existing emissions pledges and the temperature goals of the 2015 Paris climate pact.

At a midnight stocktaking session on Dec. 15, Carolina Schmidt, Chile’s environment minister, who served as president of the talks, appealed for consensus.

“I request all your strength to get an ambitious agreement. I count on you to reach consensus,” she said.

Earlier, Andres Landerretche, COP25 presidency coordinator, ratcheted up expectations, saying at an on-site press conference that his mood was one of “general-moderate optimism” and that he hoped the final contributions of delegates would “crystallize into a very good outcome.”

As it turned out, the Madrid talks became mired in disputes over the rules that should govern international carbon trading. Brazil and Australia were among the main holdouts, delegates said, and the summit deferred big decisions on carbon markets until later.

“We are of mixed emotions,” Schmidt said after the final decisions were made.

U.N. Secretary-General António Guterres said in a tweet that he was “disappointed with the results.” He added that the summit outcome, in his view, meant that “the international community lost an important opportunity to show increased ambition on mitigation, adaptation & finance to tackle the climate crisis.”

Meanwhile, The Heartland Institute hosted a counter-conference in Madrid, during which experts challenged the climate emergency narrative.

“We are here to present a dose of reality and sound science, as opposed to much of what we hear from the United Nations,” said James Taylor, director of the Arthur B. Robinson Center on Climate and Environmental Policy at The Heartland Institute.

Speakers at the event included Will Happer, former top science adviser to President Donald Trump. Happer argued in support of the position that human greenhouse gas emissions are having a significantly lower impact on global temperatures than some claim.

H. Sterling Burnett, who serves as a Heartland senior fellow on environmental policy, said in a report from the conference that Happer’s presentation demonstrated that human effects on climate were far more benign than what was “predicted by alarmist climate theory and are certainly not causing a climate crisis.”

“Happer described the many beneficial effects of higher atmospheric carbon dioxide levels, including a dramatic greening of the Earth as more carbon dioxide serves as aerial fertilizer for crops and vegetation,” Burnett said.

Heartland reorganized its event, called the Climate Reality Forum, after the U.N. climate summit was moved due to social unrest.

“COP 25 had to change locations from Chile to Spain at very short notice (after it had already changed locations from Brazil to Chile), after riots erupted around the country in protest to energy price hikes to pay for Chile’s climate change programs, forcing Chilean President Sebastian Pinera to put troops on the streets and cancel his plans to host COP 25,” Burnett said.

Meteorologist Anthony Watts, a Heartland Institute senior fellow, said that algorithms relied on by climate alarmists to predict crisis-level global warming incorporate “bad data,” including from temperature sensors close to artificial heat sources such as buildings. Watts said that by not discarding corrupt data, the models show more warming than is measured by weather balloons and global satellite instruments.

German YouTube personality Naomi Seibt, referred to by some as the “antidote to Greta Thunberg,” discussed her shift away from believing in the existence of a climate crisis.

“It is important we keep questioning the narrative that is out there instead of promoting it,” Seibt said.

“These days, climate change science really isn’t science at all. … They draw their conclusions before even testing their hypotheses, and they base their assumptions on completely incoherent models, which is just an insult to science itself.”

“The doomsday forecasters are now grasping at new names to rebrand the movement. What was once global warming, is now climate change, climate disaster, global meltdown, climate collapse, scorched earth, climate emergency, and the latest movement, ‘We don’t have time.’ Like Gore’s initial predictions, all the tweets lack the basis for their dismal projections,” Stein wrote in an op-ed.

“The tweets are void of any ‘beef or facts’ as to what’s going to cause this forthcoming demise. They tweet rhetorical questions and emotional statements, and the millions of followers being brainwashed with scaremongering dogma slurp it up, as environmentalism has become the new religion.”

Geologist Gregory Wrightstone, author of “Inconvenient Facts: The Science That Al Gore Doesn’t Want You to Know,” told The Epoch Times that a radical shift away from fossil fuels into unproven and unreliable sources of energy would cause not just economic contraction, but human misery.

“We’re being told: ‘No, don’t use our resources to better mankind. You need to quit using fossil fuels that are actually lifting people out of generational poverty,’” he said.

“What these people are doing who are pushing the Green New Deal and the Paris Climate Accord, they’re destining billions of people around the world to continued generational poverty,” Wrightstone said. “We’ve been lifting people out of poverty using fossil fuels by providing abundant, affordable, reliable energy, and not one of those three words are associated with wind or solar.”

Climate Change Narrative Is Driven by Agenda of Political Control