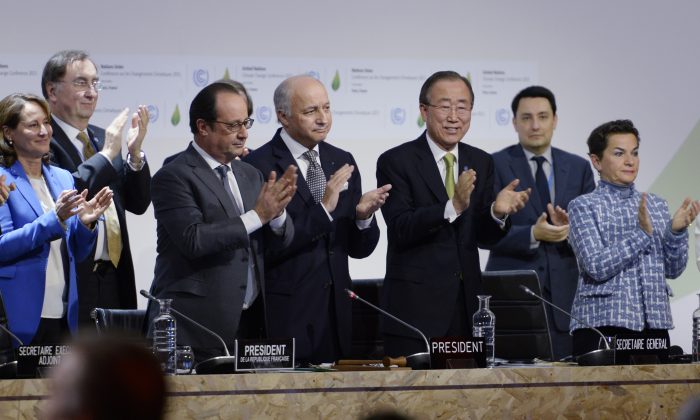 Known as COP21 – the 21st session of the Conference of Parties – talks went into overtime, with the final draft of the “Paris Agreement” unveiled on Dec 12, and slimmed down to 21 pages.

Its long-term goal is to: “reach global peaking of greenhouse gas emissions as soon as possible”, and “achieve a balance between anthropogenic emissions by sources and removals by sinks of greenhouse gases in the second half of this century”.

This means that carbon pollution emitted by human activities must drop to the amount that oceans, soil and trees can naturally absorb before 2100. In other words, our reliance on fossil fuels for economic growth must switch to renewable sources this century.

Key measures included in the agreement are:

* To limit global temperature increase at “well below” 2°C of pre-industrial levels, with an aspirational commitment of 1.5°C which would help to better protect low-lying countries vulnerable to rising sea levels;

* The commissioning of a 2018 report from the Intergovernmental Panel on Climate Change (IPCC), the UN’s climate change research body, to provide the requisite steps for reaching these temperature targets;

* New climate plan pledges by 2020 from each participating country, based on the report and technology developments, with 5-yearly reviews and an expectation for signatories to strengthen their pledges each time;

* For industrialised countries to provide developing countries with at least US$100 billion annually towards reducing emissions and adapting to the impacts of climate change.

The last point refers to the “loss and damages” clause. Wealthy countries that were built up using fossil fuels are required to help poorer nations cope with damages caused by global warming, but there will not be any “liability or compensation” payable.

While delegates hailed the event as a success, many observers remained sceptical, including over 10,000 protestors demonstrating in the French capital who believe that the new deal is not enough to save the planet.

The agreement did not mention shipping and air travel, which are responsible for up to 8 per cent of global emissions, and an important part of the world’s economy. Apparently these sources of pollution will be addressed next year in separate agreements.

Greenpeace executive director Kumi Naidoo said in a press release: “This deal puts the fossil fuel industry on the wrong side of history … This deal alone won’t dig us out the hole we’re in, but it makes the sides less steep.”

Meanwhile, business magnate Richard Branson issued a brief statement about the so-called “Paris effect”, saying the agreement will ensure the “economy of the future is driven by clean energy”.

The pact is legally binding, although some details are not. For example, all participants must submit and regularly review an emissions reduction target, but there are no penalties if targets are not met.

Climate models based on current national climate plans show that warming will only be limited to around 3°C, which is expected to push the climate past tipping points into dangerous instability.

To keep warming at 2°C, carbon dioxide emissions would have to fall to net zero by 2075, or by 2050 to keep it at 1.5°C, according to calculations by the World Resources Institute (WRI).

Presently, the environment absorbs around half of global man-made carbon dioxide emissions. But once emission levels drop, it may actually absorb less or even release old pollution into the air. To achieve the 1.5°C target, “negative emissions” processes would be required to extract sufficient carbon dioxide from the atmosphere, such as forest plantings, or biomass energy power plants that can store carbon dioxide emissions underground instead of releasing it.

It seems there will be serious consequences for Earth and humanity, like inundation of low-lying areas, desertification and ocean acidification, unless the future pathways adopted towards zero emissions are highly ambitious and effective in restricting global warming to 1.5°C.