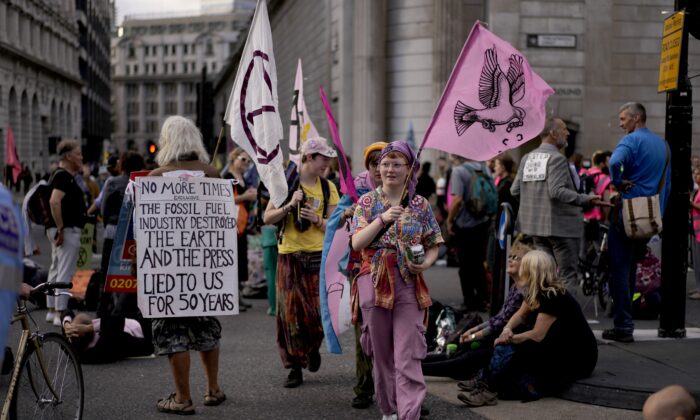 Extinction Rebellion climate change activists take part in a protest outside the Bank of England in London on Sept. 2, 2021. (AP Photo/Matt Dunham)
Viewpoints

Missing from most, if not all, coverage of August’s climate science report from the U.N. Intergovernmental Panel on Climate Change (IPCC) was the fact that its most important conclusions are impossible—not merely contested or exaggerated, but literally impossible.

Consider the following from the IPCC Working Group I report, “Climate Change 2021: The Physical Science Basis,” issued on Aug. 9:

“Warming of the climate system is unequivocal, as is now evident from observations of increases in global average air and ocean temperatures, widespread melting of snow and ice, and rising global average sea level.”

It’s obviously a mistake to refer to “global average air and ocean temperatures … and global average sea level” as “observations.” They’re the results of statistical manipulations of thousands of observations in different places and at different times.

But more significantly, the idea that any of the scientific conclusions of the IPCC are “unequivocal,” or, as Al Gore often asserts, “truth,” is irrational.

Plato defined truth as something that’s universal, necessary, and certain.

It’s universal in the sense that it applies everywhere. Whether you’re in Athens, Sparta, or on another planet, it’s true. It also applies “everywhen”—now, in five minutes, or in a billion years.

Truth is also necessary. It must be the way that it is, there’s no other explanation possible. It’s unequivocal.

And truth is certain. It isn’t a matter of probability. It’s in the bank.

Truth applies to things such as mathematics or chess in which we write the rules. Two plus two equals four. The Queen can move vertically, horizontally, or diagonally in a straight line around the chessboard, as long as no pieces are obscuring her path. Those statements are true and unequivocal.

But truth never applies to our findings about nature. Those findings are educated opinions based on scientists’ interpretations of observations. And philosophers since ancient times have recognized that observations can’t prove anything to be true. In contrast to being universal, necessary, and certain, empirical evidence is particular, contingent, and has some degree of probability.

So, contrary to the IPCC’s confident pronouncement, observational evidence can’t be used to prove anything to be true or unequivocal. Not only are our methods of observing imperfect, but we all have biases that affect how we interpret what we see.

Indeed, all scientific hypotheses, and even scientific theories, are never truth or unequivocal; they can be, and often are, wrong. Science “facts” are merely the current opinions of experts, and, especially in the case of climate change, different experts often have very different points of view.

For example, the Climate Change Reconsidered series of reports from the Nongovernmental International Panel on Climate Change (NIPCC) summarizes thousands of studies from peer-reviewed scientific journals that either refute or cast serious doubt on the IPCC’s science. So, contrary to being unequivocal, there are many possible scientific explanations for the modest warming of the past century.

Consider the following feedback about the IPCC’s use of the word “unequivocal” from two philosophers.

It’s “an attempt to persuade extra-logically,” he said.

“Strictly logically, no observations can lead to an ‘unequivocal’ interpretation,” Goldman said.

David Wojick, a Virginia-based doctoral degree holder in the logic and philosophy of science, disagrees with Goldman about the climatic impact of human activity, but agrees that the IPCC has made a serious mistake in their report.

It wouldn’t be quite so bad if the IPCC’s use of “unequivocal” was limited to this single quote, but the word appears a total of 32 times in the full report. And that mistake has appeared regularly in past IPCC reports, as well as in statements from IPCC leaders.

So why do more philosophers not speak out about these problems—errors that are diverting the public from properly considering the various arguments presented? It may be that academics judge that acceptance of climate concerns will encourage pollution reduction, alternative energy development, conservation, increased foreign aid, and social justice—things many of them regard as beneficial. So they keep their opinions to themselves rather than risk impeding progressive policies.

But when authorities preach truth about science, progress stops.

Albert Einstein once said, “Whoever undertakes to set himself up as a judge of truth and knowledge is shipwrecked by the laughter of the gods.”

It might be humorous to the gods, but the belief that we know the “truth” about climate change and that the science is unequivocal has resulted in more than $1 billion per day being spent trying to “stop climate change.” Imagine what could be done if such vast sums were instead dedicated to education, health care, cleaning up our rivers, or adapting to the inevitable natural environmental changes that lie ahead.

It’s time to open up the scientific debate about climate change, one of the most complex and costly issues of our age.