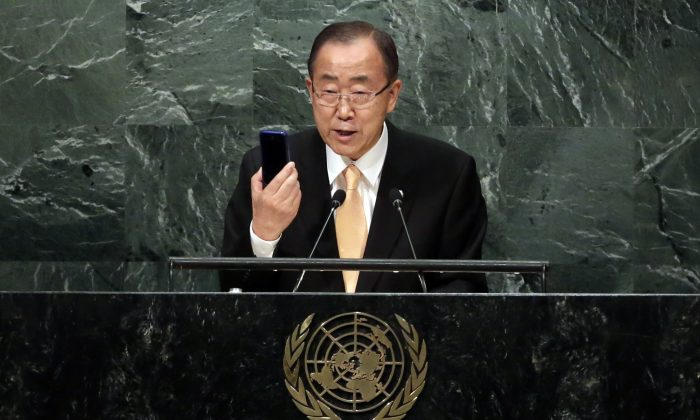 The U.N. chief told presidents, prime ministers, monarchs and ministers at the opening of General Assembly’s annual ministerial meeting on Tuesday that “powerful patrons” on both sides in the more than five-year Syrian conflict “have blood on their hands.”

“Present in this hall today are representatives of governments that have ignored, facilitated, funded, participated in or even planned and carried out atrocities inflicted by all sides of the Syria conflict against Syrian civilians,” he said.

“Many groups have killed innocent civilians—none more so than the government of Syria, which continues to barrel bomb neighborhoods and systematically torture thousands of detainees,” he added.

Ban, whose term ends on December 31, accused South Sudan’s feuding leaders of betraying their people. He said “in too many places, we see leaders rewriting constitutions, manipulating elections and taking other desperate steps to cling to power.”

Looking back on his nearly 10 years at the helm of the United Nations, Ban cited the rise of “people power” with mobile phones that now blanket the world, reductions in poverty, political transitions in Band Sri Lanka, and the cease-fire agreement in Colombia.

He said he was proud that UN Women was established under his watch and drew loud applause when he said: “I am proud to call myself a feminist.”

But the focus of his annual state of the world report was on the myriad problems on the global agenda—and the leaders who fail to tackle them.

He listed a host of “grave security threats”—fighting in Yemen, Libya, Iraq, Afghanistan and the Sahel and the Israeli-Palestinian conflict where “the prospects for a two-state solution are being lowered by the day.”

He also ticked off other issues—extremists who push people “into camps of ‘us’ and ‘them’,” mistrust that divides citizens from their leaders, and the rising seas, record heat and extreme storms resulting from climate change.

The spotlight at the annual meeting will not only be on the global crises but the possibility of solutions, topped by the Syrian conflict, escalating attacks around the world by Islamic extremists, and millions of people fleeing fighting and poverty.

Whether the 135 heads of state and government and more than 50 ministers are able to make any progress before the high-level meeting ends on Sept. 26 remains to be seen. While hopes are high, expectations are low.

The leaders are meeting against a backdrop of rising ethnic and religious tension, fighting elsewhere in the Mideast and Africa, a warming planet, and unfulfilled goals to give every child in the world a primary school education and to achieve equality for women.

The global chaos facing the leaders was made even starker in the past two days with the attacks in New York City and the deadly attack on a U.N. humanitarian convoy in Syria and the near collapse of a cease-fire in the war-ravaged country that has been repeatedly broken.

The latest developments placed added importance on a meeting early Tuesday morning of the International Syria Support Group, comprised of about 20 countries supporting opposing sides in the conflict. It will be led by U.S. Secretary of State John Kerry and Russian Foreign Minister Sergey Lavrov, who hammered out the cease-fire agreement.

The spotlight is also certain to shine on three leaders scheduled to speak at the assembly’s opening session Tuesday morning.

U.N. Secretary-General Ban Ki-moon who steps down on Dec. 31, and U.S. President Barack Obama who will leave office in January, will be addressing the 193-member world body for the last time. And British Prime Minister Theresa May will be making her debut on the world stage less than three months after the country voted to leave the European Union.

Many leaders came a day early to attend Monday’s first-ever U.N. summit on refugees and migrants, which approved a declaration aimed at providing a more coordinated and humane response to the world’s 65.3 million displaced people.

It calls for separate Global Compacts for refugees and migrants to be adopted within two years. But human rights groups complained that it was watered down, eliminating Ban’s proposal to resettle 10 percent of the world’s refugees annually.

According to a U.S. official, speaking on condition of anonymity ahead of the summit, at least 45 countries are expected to make pledges that will meet or exceed U.S. goals of increasing humanitarian aid by $3 billion, doubling resettlement and lawful admission spots, and increasing access to education for 1 million youngsters and access to employment by 1 million.