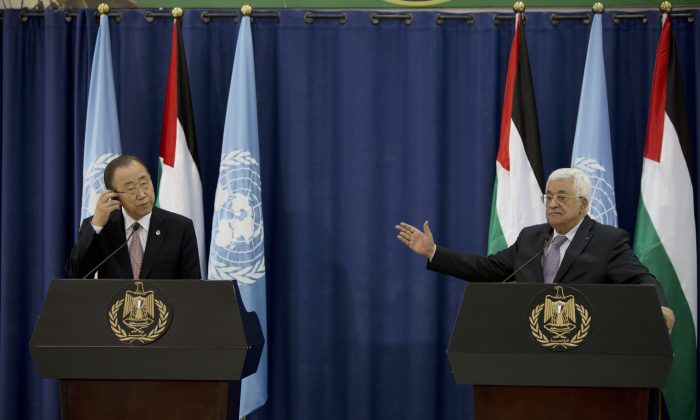 JERUSALEM—The latest developments in a wave of Israeli-Palestinian violence (all times local).

A British diplomat says U.N. Secretary General Ban-Ki-moon offered the Security Council a grim assessment of prospects for defusing the violence between Israel and the Palestinians.

British Ambassador Matthew Rycroft says council members were “struck by the pessimistic tone” Ban took during the closed video briefing. Ban spoke to council members after meeting with Israeli and Palestinian leaders during a surprise trip to the Middle East.

Rycroft says Ban urged “all of those with influence need to use it to deescalate the situation.”

But Rycroft said he expected no concrete action to emerge from a Security Council debate on the Middle East on Thursday. He said, “It doesn’t look like there is going to be consensus for a significant new step agreed upon tomorrow but we continue to live and hope.”

Israel’s military says a Palestinian rammed his car into a group of Israelis in the West Bank, injuring four people.

It said that soldiers at the scene Wednesday night opened fire at the assailant.

Channel 2 TV reported that an Israeli car was pelted with rocks prompting the passengers to get out of the vehicle and a Palestinian car drove then into them. The driver of the Palestinian car was also injured but it was not clear if he was shot or hurt in the crash, it said. The military said he was taken to a local hospital for treatment.

It was the latest incident in about a month of violence. Palestinian assailants have killed 10 Israelis, mostly in knife attacks, while 47 Palestinians—including 26 identified by Israel as attackers—have been killed. The others died in clashes with Israeli security forces.

German Chancellor Angela Merkel says Israel and the Palestinians both to “need to make a contribution” in order to restore calm after weeks of unrest.

At a news conference with Israeli Prime Minister Benjamin Netanyahu, Merkel urged him to rethink his policy on West Bank settlements, calling them “counterproductive” to a two-state solution.

“I have spoken out against them many times and if it is about doing everything possible right now to calm the situation, then I think all sides need to make a contribution,” she said at a joint press conference Wednesday evening in Berlin.

She also said Israel has an “obligation” to protect its own citizens and said the Palestinians must condemn “everything constituting the support of terror.”

Netanyahu reiterated his claim that Palestinian incitement—not Israeli policies—are at the root of the current violence.

The Israeli military says a rocket from the Gaza Strip has been fired at Israel.

In a statement, it said the rocket appeared to have landed in an open area Wednesday evening. The rocket caused air raid sirens to go off in several communities, but there were no reports of injuries.

Gaza’s Hamas rulers have largely honored a cease-fire that ended a 50-day war in the summer of 2014. But jihadist groups continue to fire rockets at Israel.

Israel says it holds Hamas responsible for all attacks out of the territory and often responds to rocket fire with retaliatory airstrikes.

A British diplomat says U.N. Secretary-General Ban Ki-moon will brief the Security Council Wednesday afternoon on his talks with Israeli and Palestinian leaders.

The U.N. chief has been pressing council members, who have responsibility for maintaining international peace and security, to take action to de-escalate the current violence and get both sides back to peace negotiations leading to a two-state solution.

Britain’s U.N. Ambassador Matthew Rycroft told reporters Wednesday that Ban’s closed video briefing and a ministerial meeting of the council on the Middle East Thursday will be focused on what the council can do on the Israeli-Palestinian conflict.

He said Britain “is ready to discuss with our colleagues on the council all options, whether they are statements, resolutions or anything else.”

Czech President Milos Zeman has assured his Israeli counterpart that his country’s support for Israel has not changed.

After a meeting in Prague on Wednesday with Israeli President Reuven Rivlin, Zeman said: “There’s no change in the Czech foreign policy toward Israel.”

Zeman, who has been siding with Israel in the conflict with the Palestinians added: I’d like to express my full personal support for the state of Israel.”

Rivlin thanked him: “A clear stance of the Czech Republic, a moral stance, is a great support for us.”

The Czech Republic is a close Israeli ally in Europe. It was the only European country that voted in 2012 to reject the resolution upgrading the Palestinians’ United Nations status to a nonmember observer state.

Ban said he haqd been urging both sides to “tell their people correctly that there should be no killings.”

He spoke alongside Palestinian President Mahmoud Abbas in Ramallah on Wednesday a day after he made a surprise visit to Jerusalem.

Shortly before he spoke, Israeli police said forces shot and killed a Palestinian who stabbed a female soldier in the neck. Police said the soldier, who was originally reported to have been lightly wounded, was in critical condition.

It was the latest attack in a month of violence by mostly young Palestinians against Israeli civilians and soldiers.

“I know that people are angry and frustrated, particularly the young people of the Palestinians—when life has always been under occupation there cannot have much hope,” Ban said.

Israeli police say a Palestinian stabbed a female soldier near Jerusalem, injuring her before he was shot and killed by forces.

It was the latest in a series of almost daily Palestinian attacks against Israeli civilians and soldiers that erupted about a month ago.

During that time, 10 Israelis have been killed by Palestinian assailants, mostly in knife attacks, while 47 Palestinians—including 26 identified by Israel as attackers—have been killed. The remainder died in clashes between Israeli forces and Palestinian protesters.

Israel’s prime minister is headed to Germany for a high-profile mission aimed at restoring calm after weeks of Israeli-Palestinian unrest.

Netanyahu will meet with Germany’s chancellor, Angela Merkel, on Wednesday before holding talks with U.S. Secretary of State John Kerry on Thursday. Kerry then heads to the region for talks with the Palestinians and Jordan.

Netanyahu said his talks with Kerry will focus on ways to “calm the situation.”

He said he would ask the U.S. to press Abbas to stop what he called “incitement” that has fueled the violence.

Over the past month, 10 Israelis have been killed in a wave of Palestinian attacks, mostly stabbings, while 46 Palestinians—including 25 identified by Israel as attackers—have been killed. The remainder died in clashes between Israeli forces and Palestinian demonstrators.