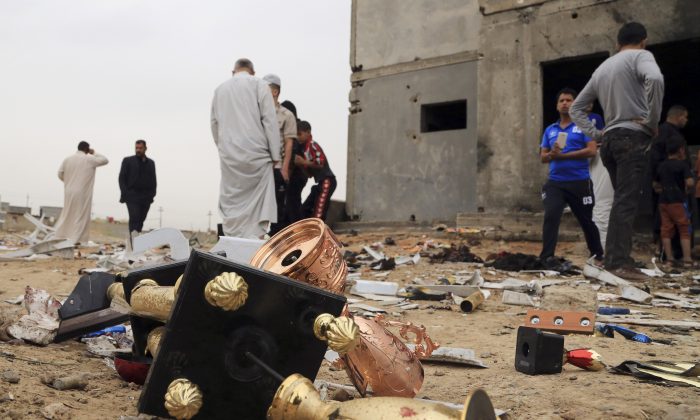 Broken Cups lie on the ground as people inspect the aftermath of a suicide bombing at a soccer field in Iskandariya, 25 miles (about 40 kilometers) south of Baghdad, Iraq, Saturday, March 26, 2016. A suicide bomber killed and wounded dozens in an attack on a crowd gathered at a soccer stadium south of Baghdad on Friday. (AP Photo/Karim Kadim)
Middle East

UN Chief Offers Condolences to Iraq After IS Stadium Bombing

BAGHDAD—U.N. Secretary-General Ban Ki-moon offered his condolences on Saturday to the families and friends of the 41 people killed in a suicide bombing at a soccer stadium in Iraq, adding that the “the international community stands with Iraqis in horror and outrage.”

Speaking during an official visit to Iraq Saturday, Ban said that the battle against the Islamic State group—which claimed attack—must comply with international law, noting continued reports of arbitrary arrests and killings in IS-liberated areas.

IS Claims Suicide Bombing on Stadium in Iraq That Killed 29

Friday’s bombing took place during a match in a small stadium in the city of Iskanderiyah, 30 miles (50 kilometers) from the capital, Baghdad. The bombing killed 41 people and wounded 105, security and health officials said. They spoke on condition of anonymity because they were not authorized to brief reporters.

The president of the world football federation FIFA, Gianni Infantino, also offered his condolences to those killed. “Around the world, football unites people. It is a very sad day, when people, going to a match together, become the victims of such violence,” he said in a statement.

IS has lost ground in recent months in Iraq and Syria, but has struck back in a series of large attacks targeting civilians.