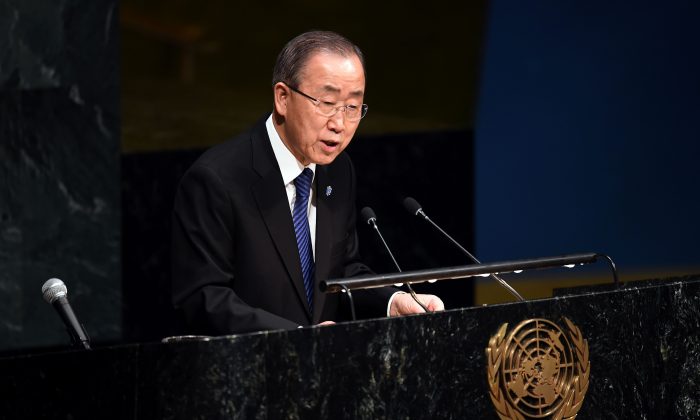 U.N. Secretary-General Ban Ki-moon sepaks during a Holocaust memorial ceremony on the occasion of the International Day of Commemoration in Memory of the Victims of the Holocaust at the United Nations headquarters in New York City on Jan. 27, 2016. (Jewel Samad/AFP/Getty Images)
Middle East

UNITED NATIONS—Progress toward peace between Israel and the Palestinians requires that Israel freeze its settlement-building in the West Bank, the U.N. secretary-general said Tuesday, calling the settlement activities “an affront to the Palestinian people and to the international community.”

Addressing the U.N. Security Council’s periodic Middle East debate, Ban Ki-moon also urged both sides to act now “to prevent the two-state solution from slipping away forever.” He condemned rocket fire from militant groups in Gaza into Israel but focused his strongest comments on Israel’s settlement-building.

“As oppressed peoples have demonstrated throughout the ages, it is human nature to react to occupation,” the U.N. chief said.

As oppressed peoples have demonstrated throughout the ages, it is human nature to react to occupation.
— Ban Ki-moon, secretary-general, United Nations

Israel captured the West Bank from Jordan in the 1967 war. Palestinians demand the territory as part of their future state. Last week, Israel approved the expropriation of some 370 acres (150 hectares) of land in another part of the territory.

Most of the international community views Israeli settlements in the territory as illegal or illegitimate.

Israeli Prime Minister Benjamin Netanyahu said Ban’s comments “give a tail wind to terrorism,” and he said the U.N. “long ago lost its neutrality and its moral strength.”

Palestinian Ambassador Riyad Mansour later told reporters that all 15 council members acknowledged that Israel’s settlement building is “the main obstacle to any meaningful political process,” and he said the Palestinians are meeting with all council members to assess their readiness to act this year.

French Ambassador Francois Delattre said the international community should create a “specific and credible political horizon” for a solution to the tensions in the region.

Chinese Ambassador Liu Jieyi said Israel should take the lead in calming tensions, and he said the Security Council “should seriously consider the question of providing international protection to the Palestinian people.” He gave no details, but Mansour said new council member Egypt would take the lead in exploring that issue.

Israel’s U.N. ambassador, Danny Danon, did not address settlement-building. He instead showed reporters what he called “terror dolls” that he said are used to teach hatred to Palestinian children.

The comments by Ban and others came after Netanyahu this week said his government is committed to West Bank settlements. Ban said he was “deeply troubled” by new reports that Israel’s government has approved plans for more than 150 new homes in settlements in the West Bank.

Israel says the fate of the settlements should be resolved in peace talks, along with other core issues like security and borders.