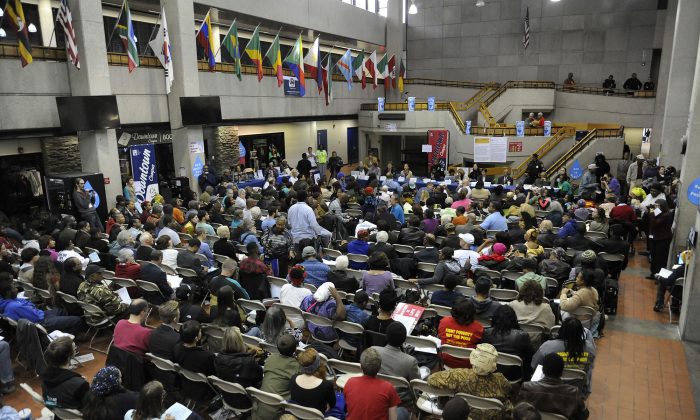 Detroit residents address a panel, which includes members from the United Nations, during a UN Fact-Finding Detroit Town Hall Meeting, Sunday, Oct. 19, 2014, at Wayne County Community College in Detroit. The residents are explaining how the recent water shutoffs to their homes affect their lives. (AP Photo/Detroit News, Jose Juarez)
US

Detroit’s crisis over water shutoffs has attracted the attention of the United Nations. Over the past three days, UN Special Rapporteurs Catarina de Albuquerque and Leilani Farha visited the city at the behest of civil society organizations, which say that the city’s mass water shut-offs are creating an unlivable city for the poorest and most vulnerable.

De Albuquerque, who is the rapporteur on the right to safe drinking water and sanitation, and adequate housing rapporteur Farhi spent Saturday, Sunday and Monday meeting residents and seeing first hand life without running water and plumbing. On Tuesday, the two officials met with Detroit Mayor Mike Duggan.

The U.N. officials said that a decline in the city’s population, a rise in unemployment, and a utility passing on expenses associated with aging water and sewer systems are to blame for the increase in costs. According to advocacy group Detroit Water Brigade, these factors have led to an average of $70 a month water bills. Combined with a high poverty level and a billing system many residents have complained is too complex when back payments pile up, thousands of city residents have had their water shut off or face a shut-off.

Detroit, the nation’s largest municipality to file for bankruptcy, said it made about 27,000 shut-offs between Jan. 1 and Sept. 30. Most were halted for several weeks during the summer to give residents a chance to enter payment plans. Then they resumed, and shutoffs topped 5,100 in September.

The U.N.’s de Albuquerque said she has seen shutoffs in other U.S. cities and developed nations, but nothing like Detroit.

“Our conclusion is that you have here in Detroit a man-made perfect storm,” de Albuquerque said, who made clear that they are not asking the city to make blanket conditions to ensure service, regardless of circumstances or ability to pay. But she did say that the situation is dire. “The scale of the disconnections in the city is unprecedented.”

The mayor’s chief of staff, Alexis Wiley, complained in a written statement that the U.N. representatives sat down for a two-hour meeting with city officials with an agenda and were predisposed to certain conclusions, regardless of Detroit’s work to stop shutoffs.

“It became clear shortly into the meeting that the U.N. representatives had reached their conclusions and prepared their recommendations before the meeting even began,” read Wiley’s statement. “The City of Detroit addressed many of the same concerns raised today by the U.N. delegation through its 10-point Water Plan.”

Recommendations from the international body, which monitors similar issues domestically and globally, included halting shutoffs and restoring service for the most vulnerable and for those unable to pay. They also said the city should give financial assistance, establish an affordability threshold, and stop tying delinquent water bills to property liens.

Wiley pointed to the Detroit Water Fund, run by United Way, which has $1.7 million for needy customers. Wiley stated that the practice of converting delinquent bills to liens has already been discontinued. According to the city, since the mayor’s 10-point plan was set up in August, the number of residential customers enrolled in a payment plan has almost doubled, to over 33,000.

“The city’s aggressive water shutoff program is in full swing,” said Wedes by phone from Detroit last week, noting that according to information his organization has, about 300 houses—both inhabited and uninhabited—have had their water shut off every day since August. By his estimation, though, many people simply can’t afford to their water bills, which are twice the national average.

“People have to make difficult decisions about what bills to pay,” he said. “We’re seeing bills of hundreds of dollars.”

Whether the city puts any of the U.N. recommendations into practice or not, a large-scale public protest is planned for Nov. 1 in conjunction with protesters in Ireland, where customers are facing austerity measures over their water bills that many have strongly opposed.