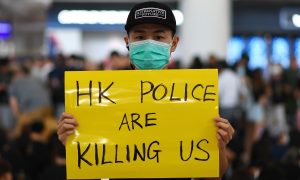 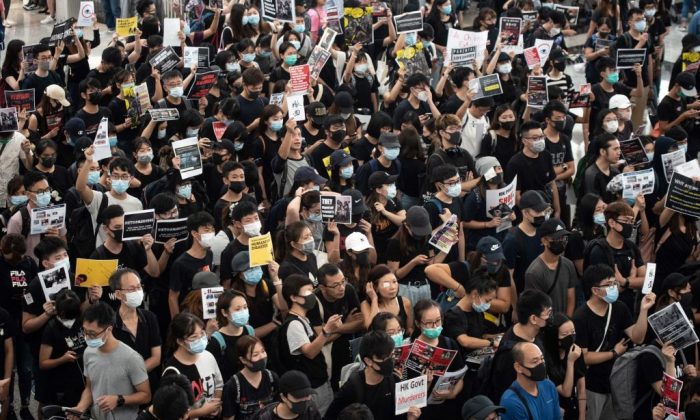 US Lawmakers Voice Support for Hong Kong Protests, While UN Condemns Police Use of Force

Several U.S. lawmakers have recently added their voice of support for Hongkongers protesting against a now-suspended extradition bill.

And for the first time, the United Nations has publicly called out Hong Kong police for deploying crowd control equipment against protesters “in ways that are prohibited by international norms and standards.”

Condemnation of police tactics have intensified, after police this weekend fired tear gas inside a metro station and apparently shot a female medic in the eye.

U.S. senators Ted Cruz (R-Texas) and Marco Rubio (R-Fla.), and Rep. Ted Yoho (R-Fla.) made public statements that Beijing is much to blame for the current crisis in Hong Kong.

“The Chinese Communist Party is deepening its campaign to deprive Hong Kong of its freedom and autonomy. The people of Hong Kong have responded with ten weeks of protests, which have been met with more threats and deepening repression,” stated Cruz in an Aug. 12 press release published by his office.

Mass protests in Hong Kong began on June 9, when over one million people took to the streets in protest against the bill, amid fears that it would leave locals and foreigners passing through Hong Kong vulnerable to extradition to mainland China, where there is no rule of law.

Since then, Hongkongers have taken to the streets every weekend en masse. Another march is being planned for this coming Sunday, passing through the city’s financial district of Central.

“The continuation of #HongKongProtests, including today’s closing of the city’s intl airport, shows that rising resentment in Hong Kong is not simply a result of the ill-fated extradition law, but the continued encroachment on freedoms & liberties by #XiJinping & the CCP [Chinese Communist Party],” wrote Yoho in an Aug. 12 Twitter post.

Rubio also took to Twitter to condemn Beijing, noting that the Hong Kong protests have revealed its true colors: ”They are not the benign & responsible actors they like to portray themselves as. They are vicious authoritarians.”

Beijing has repeatedly voiced support for the Hong Kong administration and police while denouncing protesters. China’s Hong Kong and Macau Affairs Office—Beijing’s highest agency for managing Hong Kong affairs—has accused protesters of being radical criminals who need to be punished during recent press conferences. On Aug. 12, Beijing escalated its rhetoric by calling the protests acts of “terrorism.”

Since Aug. 9, thousands of Hongkongers had taken part in an airport sit-in to inform travelers about the ongoing protests. Airport authorities then canceled hundreds of flights in the afternoon on Aug. 12, on the grounds that protests had disrupted operations.

The airport reopened on Aug. 13 morning. But as the day wore on, more flights were canceled. At around 4:30 p.m., the airport authority announced that check-in services for departing flights were suspended, and advised the public not to come to the airport.

Also on Aug. 13, the United Nations High Commissioner for Human Rights Michelle Bachelet made her first-ever public statement regarding the Hong Kong protests. At a news briefing in Geneva, spokesman Rupert Colville read out her statement: “The UN Human Rights Office has reviewed credible evidence of [Hong Kong] law enforcement officials employing less-lethal weapons in ways that are prohibited by international norms and standards.”

She explained that police firing tear gas into crowded, enclosed areas and directly at individuals create “a considerable risk of death or serious injury.”

In tune with one of the protesters’ consistent demands, Bachelet urged the Hong Kong government to investigate the police use of force and ensure that they “comply with the rules of engagement.”

Lam suspended the bill in June and called the bill “dead” following massive protests. However, she has refused to formally withdraw the bill as demanded by protesters.

“The people of Hong Kong are making clear that they will not tolerate repression, and their movement affirms: The power is with the people. They deserve our support and the support of the world,” Warren wrote on Twitter.

“America’s relationship with Hong Kong is premised on its autonomy from China, and if the Communist Party refuses to ensure that autonomy then the United States should and will reevaluate that relationship,” Cruz said.

He added that he would push for the Hong Kong Policy Reevaluation Act to be passed in the Senate, “until authorities withdraw the extradition bill from future consideration and take steps to ensure that Hong Kong’s special status is protected.”

The bill (S.1824), which proposes requiring the U.S. State Department to submit a report on how China “uses Hong Kong to circumvent the laws of the United States,” was introduced on June 12.