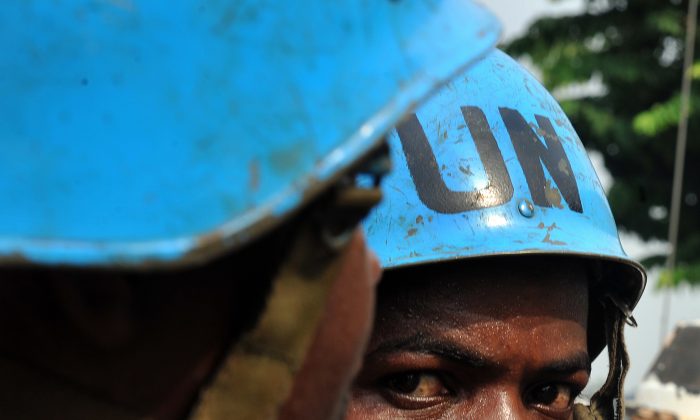 A U.N. peacekeeper looks on as he patrols in a street in Abidjan, Ivory Coast, on Jan. 8, 2011. (Issouf Sanogo/AFP/Getty Images)
International

UNITED NATIONS—The U.N. Security Council on Friday approved its first-ever resolution tackling the escalating problem of sexual abuse by U.N. peacekeepers who act as predators when sent to protect vulnerable civilians in some of the world’s most volatile areas.

The resolution was approved by a vote of 14-0 with Egypt abstaining after a last-minute amendment it proposed that would have weakened the text was defeated.

The U.S.-drafted resolution endorses Secretary-General Ban Ki-moon’s plan for reform, including his decision to repatriate military or police units “where there is credible evidence of widespread or systemic sexual exploitation and abuse.”

It also asks Ban to replace contingents where allegations are not properly investigated, perpetrators are not held accountable or the secretary-general is not informed on the progress of investigations. The Egyptian amendment would have required that all three conditions are met before a military or police unit is sent home, not just one of them as now required.

It’s up to the home country of the soldier or police officer to conduct the investigation and determine the punishment if allegations of sexual abuse or exploitation are proven.

The United States, the biggest financial contributor to U.N. peacekeeping operations, said it wanted the U.N.’s most powerful body to send a strong signal that it will not tolerate the escalating problem.

“To the victims of sexual exploitation and abuse by peacekeepers, we pledge that we will do better,” U.S. Ambassador Samantha Power said after the vote. “We will do better to ensure that the blue helmets that we send as your protectors will not become perpetrators.”

Secretary-General Ban called the resolution “a significant step in our collective efforts to combat the terrible damage caused to victims of sexual exploitation and abuse” and pledged to ensure protection and support for those who have been abused, his spokesman said.

More than 100,000 troops and police are deployed in the U.N.’s far-flung peacekeeping operations, the vast majority from developing countries. The United Nations reimburses troop contributing countries for salaries and provides allowances for peacekeepers.

As part of the secretary-general’s reforms, the United Nations has for the first time begun naming the countries of alleged perpetrators, a move meant to pressure states to pursue allegations that, U.N. records show, they often have let slide. Ban has also pledged to speed up investigations and to make information available about outstanding allegations on a new U.N. website.

Egypt’s U.N. Ambassador Amr Abdellatif Aboulatta said libeling and “branding entire states” is totally unacceptable and “drastically and inevitably affects the morale of the troops.” He said it would have been more appropriate if the Security Council focused on the root causes of sex crimes including training and supervision at camps for peacekeepers.

One of the 25 allegations this year is against an Egyptian peacekeeper in the Central African Republic. Egyptian authorities are investigating the case, according to the U.N. website.

Russia and China supported the Egyptian amendment but then voted in favor of the resolution.

Russia’s deputy U.N. ambassador Petr Iliichev said it was “wrong” for the council to reject the Egyptian amendment which reflected the view of troop contributing countries. But he said Russia decided to support the resolution because the final text was expanded to call for all forces deployed by the Security Council—a reference to French troops accused of sexually abusing children in Central African Republic and African Union soldiers in Somalia, Darfur and elsewhere.

“Today is a step in the right direction,” Amnesty International’s Crisis Response Director Tirana Hassan said, “but it will still require significant reform throughout the U.N. system.”