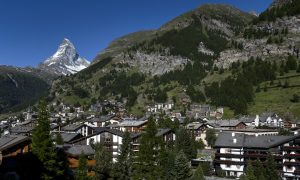 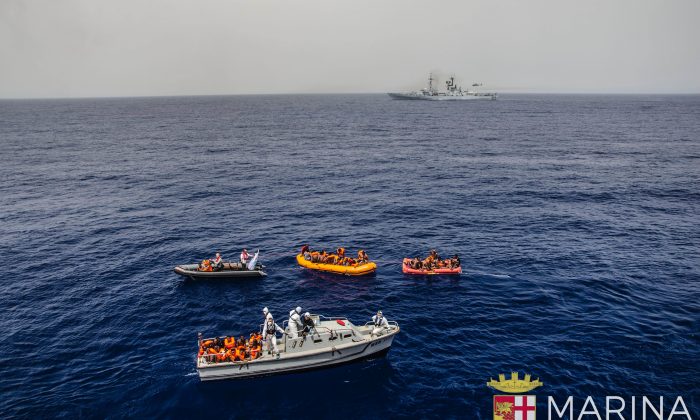 Rescuers tow migrants to board the Italian Navy ship Vega, after the boat they were aboard sunk in the Mediterranean Sea, off the Libyan coast, on May 27, 2016. (Raffaele Martino/Marina Militare via AP Photo)
Europe

POZZALLO, Sicily—Survivor accounts have pushed to more than 700 the number of migrants feared dead in Mediterranean Sea shipwrecks over three days in the past week, even as European ships saved thousands of others in daring rescue operations.

The shipwrecks appear to account for the largest loss of life reported in the Mediterranean since April 2015, when a single ship sank with an estimated 800 people trapped inside. Humanitarian organizations say that many migrant boats sink without a trace, with the dead never found, and their fates only recounted by family members who report their failure to arrive in Europe.

“It really looks like that in the last period the situation is really worsening in the last week, if the news is confirmed,” said Giovanna Di Benedetto, a Save the Children spokeswoman in Italy.

Warmer waters and calmer weather of late have only increased the migrants’ attempts to reach Europe.

The largest number of missing and presumed dead was aboard a wooden fishing boat being towed by another smugglers’ boat from the Libyan port of Sabratha that sank Thursday. Estimates by police and humanitarian organizations range from around 400 to about 550 missing in that sinking alone.

One survivor from Eritrea, 21-year-old Filmon Selomon, told The Associated Press that water started seeping into the second boat after three hours of navigation, and that the migrants tried vainly to get the water out of the sinking boat.

“It was very hard because the water was coming from everywhere. We tried for six hours after which we said it was not possible anymore,” he said through an interpreter.

He jumped into the water and swam to the other boat before the tow line on the navigable boat was cut to prevent it from sinking when the other went down.

A 17-year-old Eritrean, Mohammed Ali Imam, who arrived five days ago in another rescue, said one of the survivors told him that the second boat started taking on water when the first boat ran out of fuel.

Police said the line, which was ordered cut by the commander when it was at full tension, whipped back, fatally slashing the neck of a female migrant.

According to Italian police, 300 people in the hold went down with the second boat when it sank, while around 200 on the upper deck jumped into the sea. Just 90 of those were saved, along with about 500 in the first boat.

Italian police said survivors identified the commander of the boat with the working engine as a 28-year-old Sudanese man, who has been arrested and faces possible charges for the deaths. Three other smugglers involved in other crossings also were arrested, police announced.

Carlotta Sami, spokeswoman in Italy for UNHCR, put the number of migrants and refugees missing in that incident at 550 based on a higher tally of 670 people on board. She said 15 bodies were recovered, while 70 survivors were plucked from the sea and 25 swam to the other boat.

Most of the people on board were Eritrean, according to Save the Children, including many women and children. One of the survivors included a 4-year-old girl whose mother had been killed in a traffic accident in Libya just days before embarking, Di Benedetto said.

The UNHCR’s Sami also said that estimated 100 people are missing from a smugglers’ boat that capsized Wednesday off the coast of Libya, captured in dramatic footage by Italian rescuers.

In a third shipwreck on Friday, Sami said 135 people were rescued, 45 bodies were recovered and an unknown numbers of migrants were still missing.

Because the bodies went missing in the open sea, it is impossible to verify the numbers who died. Humanitarian organizations and investigating authorities typically rely on survivors’ accounts to piece together what happened, relying on overlapping accounts to establish a level of veracity.

Survivors of Thursday’s sinking were taken to the Italian ports of Taranto on the mainland and Pozzallo in Sicily. Sami says the U.N. agency is trying to gather information with sensitivity considering that most of the new arrivals are either shipwreck survivors or traumatized by what they saw.

Italy’s southern islands are the main destinations for countless numbers of smuggling boats launched from the shores of lawless Libya each week packed with people seeking jobs and safety in Europe. Hundreds of migrants drown each year attempting the dangerous Mediterranean Sea crossing.