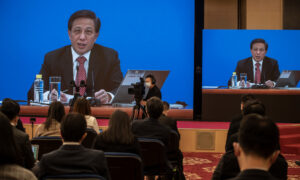 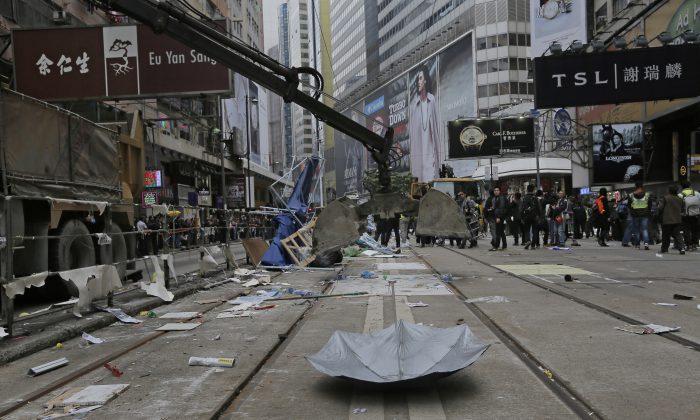 An excavation shovel is lowered to pick up an umbrella left behind by protesters as police clear barricades and tents on a main road in the occupied areas at Causeway Bay district in Hong Kong Monday, Dec 15, 2014. (AP Photo/Vincent Yu)
China

A police negotiator gave the 17 protesters one last chance to leave voluntarily from a short stretch of road in Causeway Bay before officers started taking them away one by one to a waiting bus.

The protesters, including senior citizens and pro-democracy lawmaker Kenneth Chan, offered no resistance. Earlier, they chanted “We will be back” and called on Hong Kong’s unpopular Beijing-backed leader, Chief Executive Leung Chun-ying, to step down. Supporters shouted encouragement from the sidewalk. By midday, the road had been returned to traffic.

The police operation came after authorities on Thursday shut down the protesters’ main camp near the heart of Hong Kong’s financial district and arrested 249 people who refused to leave. One last pocket of protesters camped out on a courtyard underneath the city’s legislature, near the main site, also cleared out voluntarily Monday afternoon. Another protest camp, in the Mong Kok district, was shut down late last month by police.

Currently, only a handful of protesters remain encamped outside the British Consulate.

The Causeway Bay protesters had managed to cling on for 79 days, but after the other two sites were cleared, they became resigned to eventually being removed as well. Many had already taken away tents, supplies and belongings before Monday’s police operation.

In a statement, police said that 955 people were arrested for occupation related offenses. In total, 130 police officers were injured and 221 protesters received medical treatment via police arrangements. The police also received 1,972 complaints from the public but will only consider 106 cases.

“With the cleanup completed in the Causeway Bay occupied area, the illegal occupation of Hong Kong over the past two months has come to an end,” said Leung, adding that tourism, retail, convention and other industries had suffered “very big” economic losses.

Government bodies, however, reported positive figures for retail and tourism in October, the first month of the pro-democracy protests.

The student-led protesters rejected Beijing’s plan to screen all candidates in the first-ever elections for Hong Kong’s top leader, but failed to win significant concessions from the government. Known as the “Umbrella Movement” for the demonstrators’ preferred method of defense against police pepper spray, the protests captured world headlines and polarized opinion in the Asian financial hub, but lost momentum as the government held to a strategy of waiting for them to fizzle out.

However, many say the protest movement sparked a wider political awakening among Hong Kong’s residents, especially the young. Protest leaders vowed to keep up their campaign of civil disobedience through other methods to continue pressuring the government for genuine democracy.

Pro-democracy lawmaker Fernando Cheung, who was on hand to observe the police operation and arrests, said the closing of the site did not mean the end of the civil disobedience campaign.

“In the Legislative Council, we will do our best to resist through an uncooperative campaign” by, for example, voting down budget requests and the government’s electoral reform package, Cheung said.

“There will be more action,” he said.

He said that even though protesters had failed to get the government to bow to their demands, they succeeded in galvanizing the city’s democracy movement.

“The duration and scale of the occupation signifies the determination and the force, the power behind the people who ask for democracy in Hong Kong. And secondly, it’s the awakening of the young generation, which has limitless power,” Cheung said.

Otto Ng, an 18-year-old college student, had been camped out at the main Admiralty protest site and came to Causeway Bay to watch the last moments.

“It feels a bit depressed and hopeless, but at the same time this is just the beginning, it’s not the end. … We still haven’t got what we wanted,” he said. “It’s awakened the Hong Kong people.”

From The Associated Press. With additional reporting by Larry Ong