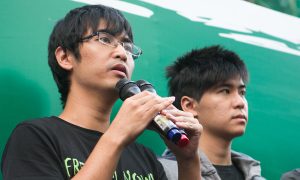 Hong Kong Students Hope for Audience in Beijing After APEC
0 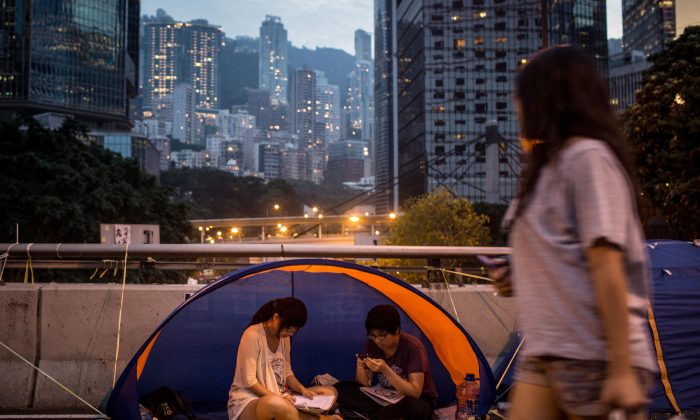 Pro-democracy activists read in a tent on a street outside Hong Kong's Government Complex on Oct. 26, 2014 in Admiralty District, Hong Kong. A student member of Hong Kong Scholarism was refused entry at the customs in the city of Shenzhen, which borders Hong Kong, on Nov. 7, 2014. (Chris McGrath/Getty Images)
China

A student member of Scholarism, an organization leading the pro-democracy Umbrella Movement protests in Hong Kong, was recently refused entry by customs officers in the city of Shenzhen, which borders Hong Kong.

On Nov. 8. Scholarism posted on Facebook that the customs officers accused a middle school student of “participating activities violating state security” and refused his entry to Shenzhen on Nov. 7.

The student was a volunteer of Scholarism who’s not well-known and had not been interviewed by any media, the Scholarism statement says. The student’s trip to mainland China was simply for personal errands unrelated to politics.

Scholarism leader Joshua Wong expressed deep concern that members’ information has been leaked. He said the name list of Scholarism members has never been open to the public and few people in the organization have the list, the Facebook post says.

Wong indicated that the organization would be more concerned and cautious when taking on volunteers in the future.

Shum believes that the blocking of this Scholarism member’s trip to the mainland is related to the plan of pro-democracy activists to visit Beijing. The students plan on appealing to the central authorities for the Hong Kong people to have the right to nominate candidates for the chief executive.

According to a decision handed down at the end of August by the Standing Committee of the Chinese regime’s rubber stamp legislature, the nominees for the chief executive position will be chosen by a committee that Beijing effectively controls.

HKFS stated last week that it was planning on marching to Beijing jointly with Scholarism and the pro-democracy Civil Human Rights Front. HKFS requested Tung Chee-hwa, a former Hong Kong chief executive who’s currently a Vice Chairman of the National Committee of the Chinese People’s Political Consultative Conference, to arrange a meeting with the central leadership.

Tung hasn’t given a clear answer, and has urged the students to end the protests and go back to their studies.

Shum told Apple Daily that HKFS’s plan of going to Beijing would not be influenced by mainland customs refusing entry to the Scholarism member, and once again urged Tung to arrange the meeting soon.

The human rights group Amnesty International reported on Nov. 7 that at least 76 mainland Chinese have been arrested for supporting the pro-democracy movement in Hong Kong. It urged the Chinese authorities to release mainland supporters immediately and unconditionally.