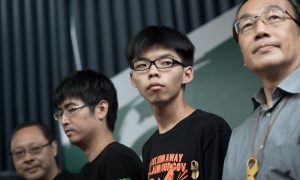 Hong Kong Umbrella Movement FAQ: What Are Protesters Demanding and Why It Matters

Umbrellas. What’s that about?

On Sept. 28, the Hong Kong police fired tear gas and used pepper spray on students and citizens gathered outside the government headquarters in Admiralty as part of a civil disobedience movement.

The protesters brought umbrellas for shade against the scorching mid-day sun, but ended up using them as personal tear gas shields instead.

Since then, the umbrella has become both the name and the symbol of the movement.

Hong Kong citizens are protesting because…?

Hongkongers are fed up with the Chinese Communist Party (CCP) going back on its word and their own government taking Beijing’s side.

On June 10, the Standing Committee of the National People’s Congress (NPCSC) practically claimed full autonomy over Hong Kong by declaring “comprehensive jurisdiction” over the former British colony in a white paper.

The NPCSC also ruled on Aug. 31 that the region’s top political leader in 2017 will be elected from two or three candidates chosen by a committee that Beijing controls.

The Aug. 31 NPCSC decision sparked a huge outcry from Hongkongers, who saw it as the Chinese regime going back on its plan to introduce fuller democracy in the city. Beijing had said in Dec. 2007 that Hongkongers “may” be able to choose their own top leader via universal suffrage in 2017 and their legislature by 2020.

Since the British handover of Hong Kong in 1997, Chief Executives have been selected by an Election Committee whose representatives have to be approved by Beijing.

According to the Joint Sino-British Declaration of 1984, however, Hong Kong should remain an autonomous region for 50 years after reunification with China in 1997 under a “One Country, Two Systems” scheme.

However, since the June white paper, that day seem farther away than ever.

With a Communist regime encroaching on their democratic rights and autonomy, and a local government that doesn’t seem to care—small wonder that tens of thousands of Hongkongers have taken to the streets.

So what are Hongkongers asking for?

First and foremost, universal suffrage for the 2017 Hong Kong Chief Executive elections, which means candidates for the chief executive will be nominated by Hongkongers, not an elite committee, and then voted on by Hong Kong citizens.

Leung is hugely unpopular because he appears to place Beijing’s demands and interests over Hong Kong’s.

Hongkongers mockingly call him “689,” the paltry number of votes he received from the 1,200 member Election Committee in 2012.

Who’s leading the protests, and where are they now?

There are two main groups with similar aims: student activists and civil society groups of the movement Occupy Central with Love and Peace.

Hong Kong University law professor Benny Tai is the most prominent figure in Occupy Central with Love and Peace (OCLP). Tai raised the idea in 2013 of occupying Hong Kong’s central business district and government complex if the CCP reneges on universal suffrage.

Professors Benny Tai Yiu-ting and Chan Kin-man and Pastor Chu Yiu-ming from OCLP have all said that they intend to contribute to Hong Kong’s pro-democracy movement by writing articles and other academic work and won’t organize any more street action.

Which parts of Hong Kong did the protesters occupy?

Mong Kok was the first protest site to be cleared on Nov. 24 and 25 via court injunctions taken against the protesters by private transportation companies.

Admiralty, better known as “Umbrella Square” to protesters, was next on Dec. 11. Many considered the demolishing of the Admiralty “tent city” as the symbolic end of the occupation phase of the Umbrella Movement.

Causeway Bay, the tiniest main protest site, was swept up on Dec. 15.

You mentioned tear gas earlier. Are the protesters really that violent?

The protesters’ peaceful, non-violent conduct is exemplary, and has been praised by the international community.

Protest sites are swept daily and kept garbage-free, and protesters have even cleaned up the public restrooms in those areas.

While student protesters have been boycotting classes since September 22, they can be spotted studying on the streets, keeping up with their education.

There is one notable incidence of violent behavior on the part of protesters, however.

On Wednesday, Nov. 19, a handful of masked protesters smashed a glass door of Hong Kong’s Legislative Council. The government blames the incident on “rioters,” while the pan-democratic camp insists that the culprits are not part of the Occupy movement.

Student leaders from prominent groups Scholarism and the Hong Kong Federation of Students have criticized the culprits for not taking responsibility for their actions, and state that the government should be held accountable for the incident.

The masked protesters have yet to be identified.

Police violence is a major talking point of the Occupy protests.

Police were given orders to clear out the protesters at the start of the third week of the demonstrations, and they were spotted leading baton charges on unarmed protesters, liberally using pepper spray, and arresting protesters.

Some journalists have even been pepper sprayed, beaten, and arrested for “obstructing” the police.

Protesters, the public, and various human rights organizations have condemned the police for their brutality.

In the aftermath of the occupation, Assistant Commissioner Cheung Tak-keung said he didn’t regret the police’s use of tear gas, while Police Commissioner Andy Tsang said police treated the student protesters like a “kind mother.”

The Chinese regime has condemned the pro-democracy movement, calling it illegal.

They have also insisted that the Umbrella Movement is a result of “foreign interference” in Hong Kong’s affairs, a line that CY Leung has parroted.

Most Chinese-language newspapers and other media, whether in the mainland, Hong Kong, or abroad, have adopted the CCP’s stance on the Umbrella Movement.

Hong Kong celebrities who have supported the pro-democracy supporters have reportedly been censored on the mainland.

So why does the Umbrella Movement matter?

On the surface, the struggle in Hong Kong is almost reminiscent of a Cold War-era confrontation between the free world and the Communist bloc.

Behind the scenes, however, lies a pivotal struggle for control of the Chinese regime.

In order to alleviate the intense pressure on them, the pro-Jiang faction has pulled strings via the NPCSC to create and influence the current situation in Hong Kong.

Chief Executive Leung Chun-ying, who is long-suspected to be an underground CCP member, is a Jiang loyalist.

Leung is believed to be behind the anti-Occupy Central protests, violent gang attacks, and brutal police action in Hong Kong.

The violence is meant to polarize the situation in Hong Kong so much that the protesters will turn violent, forcing Xi to use violence or else give in to the protesters. Either outcome would weaken Xi within the Party, making it easier for Jiang’s faction to challenge him.

Xi is reportedly angry with Leung for resorting to violence, as he doesn’t want a 1989 Tiananmen-style suppression of the Umbrella Movement.

Yet if Xi berates Leung in public, or removes him, and allows democratic reform in Hong Kong, he weakens the Party’s position.

Alternatively, if Xi endorses Leung’s actions, it would be a major victory for the Jiang faction, weakening Xi’s own position.

Depending on how Xi handles the Hong Kong situation, there could be a sweeping changes in China’s political scene.

And any political change in China, the world’s second largest economy and “sweatshop of the world,” will definitely have an impact on everyone on the globe.