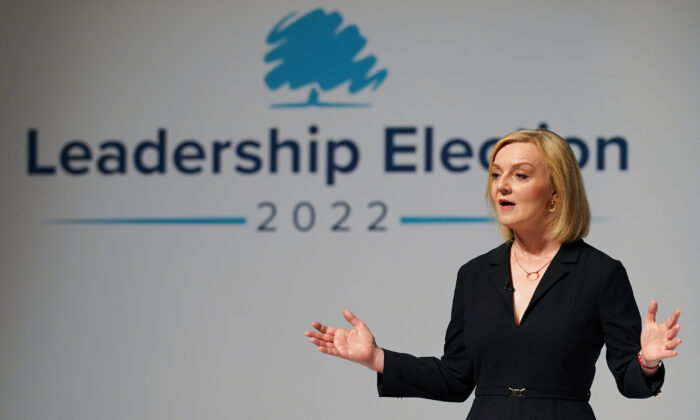 Conservative Leadership hopeful Liz Truss speaks at the fifth Conservative leadership hustings before an audience of Party members and media at the Darlington Hippodrome in Darlington, England, on Aug. 09, 2022. (Ian Forsyth/Getty Images)
UK

Foreign Secretary Liz Truss said on Monday that she has been “actively looking at” ways for the UK to deal with genocidal regimes.

It could bring an end to a months-long tug-of-war in which British lawmakers tried to pressure the government into recognising the Uyghur genocide in China’s Xinjiang region.

Campaigning at an event hosted by the Conservative Friends of Israel, Truss also vowed to follow the issue through and “make sure that regimes committing genocide can be held to account” if she emerges victorious in the leadership contest next month.

In December 2021, an independent people’s tribunal in London, led by Sir Geoffrey Nice QC, ruled that the Chinese communist regime had committed genocide against Uyghurs and other Muslim minorities in the far west Xinjiang region.

Examining evidence that had largely been in the public domain, the tribunal found that the Chinese Communist Party, through an array of repressive acts including mass internment, family separation, sterilizations, and forced labor, had implemented a “deliberate, systematic, and concerted policy” to lower the Uyghur population in the region.

The United States government has recognised that the Chinese regime had committed “genocide” and “crimes against humanity” against Uyghur Muslims since January 2021, as did the UK Parliament and a number of other legislatures around the globe, but the UK government has so far resisted the pressure to label the abuses “genocide,” citing successive government’s policy that only a “competent court” can make such designations.

Currently, there are two international courts that can potentially deal with genocide, but they are effectively paralysed when it comes to allegations against the Chinese regime.

The International Court of Justice, which deals with state-sponsored genocide, can’t deal with allegations of genocide in China because of the country’s veto power in the U.N. Security Council.

The International Criminal Court, “where individuals are tried for grievous crimes,” needs the nation in question to be a signatory to the Rome statute, which China is not.

Lord David Alton last year proposed an amendment to the UK’s post-Brexit Trade bill to give UK courts the power to designate genocide in order to stop the government from trading with genocidal regimes, but the amendment ultimately lost its teeth after being watered down by the ministers.

Vocal critics of the Uyghur genocide, including lawmakers supporting the genocide amendment, Nice, and the Uyghur Tribunal, were sanctioned by the Chinese regime in March last year.

Asking Truss’s opinion on Alton’s amendment, Lord Stuard Polak said he had voted against the government in support of it and was “told off” by party whips.

Truss responded by saying she was “actively looking at what we can do to deal with the issue of genocide.”

“Because the fact is that the international court system is not working, that we’re not able to properly designate it, so I’m looking at other mechanisms we can use,” Truss said.

The foreign secretary said she recently had a meeting with Prime Minister Boris Johnson and some of the lawmakers sanctioned by the Chinese regime for being vocal on Xinjiang, adding: “I’m committed to following that through as prime minister to make sure that regimes committing genocide can be held to account.”

The comment received a huge welcome from human rights advocates.

Commenting on a clip of the event showing the question and answer, Alton wrote on Twitter: “Great question, great reply.”

Human rights campaigner Luke de Pulford, who works closely with Alton and other parliamentarians on countering human rights abuses in China, said it was “extremely gratifying to see this.”

Nusrat Ghani, one of the MPs sanctioned by the Chinese regime, said this is why she’s backing Truss’s campaign.

“She listens, engages with colleagues, [and] you can trust her to get things done,” Ghani wrote on Twitter.

“Genocide Amendment was hard fought [and] I even got sanctioned by China for it. But Lizz [sic] accepts the U.N. isn’t working and we need to do more,” she added.

Truss and her opponent Rishi Sunak have both vowed to be tough on China, but it appears Truss, who has a longer track record of speaking out against the regime, has the support of most China hawks.

Conservative Party members will have until Sept. 2 to cast their vote, and the winner will be announced on Sept. 5.