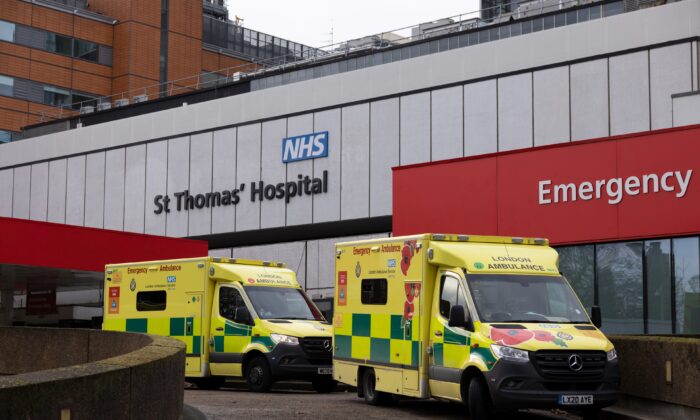 At the NHS Recovery Forum held in Downing Street on Jan. 7, Sunak told health and social care leaders he recognised the “tough time” they’ve experienced since the start of the COVID-19 pandemic.

“During the pandemic we had to bring boldness and radicalism to how we did things in order to get through,” he said, according to Downing Street.

“I think we need that same bold and radical approach now because a business-as-usual mindset won’t fix the challenges we face.”

This comes as the NHS is dealing with record-high backlogs accumulated during the pandemic, winter pressure with increased flu and COVID-19 cases, and strikes over pay disputes.

A government spokeswoman said that the prime minister expressed his “deep gratitude” to the NHS workforce for “all their hard work and dedication especially during the pandemic.”

She said Sunak and health ministers found the discussions “highly valuable for sharing ideas and best practices that could be spread nationwide to improve care for patients throughout the country.”

“The prime minister has made it one of his top five priorities to reduce NHS waiting lists so that people get care more quickly, and the government is investing a record amount in the health service, including in recruiting a record number of doctors and nurses,” she said.

Health Secretary Steve Barclay will meet with union leaders on Jan. 9 to discuss NHS pay for the next financial year.

He said he’d adopt a “constructive approach” to the negotiations, with increases on the table if the unions will agree to efficiency savings to make higher salaries more “affordable.”

Writing in The Sunday Telegraph, Barclay said workers could get a significant pay boost from April if staff will accept radical reforms to improve productivity.

“I remain ready to engage with unions on what the government can do to support the workforce, and I look forward to talking with the trade unions to see how we make any settlement done through the independent pay body more affordable, where there are productivity and efficiency opportunities,” he said.

Talking to the BBC on Jan. 8, the prime minister indicated that talks with health unions will focus on the pay settlement for the upcoming financial year rather than demands for negotiations on the current deal.

“When it comes to pay we’ve always said we want to talk about things that are reasonable, affordable, and responsible for the country,” Sunak said.

“We are about to start a new pay settlement round for this year, we’re about to start that independent process, and before that process starts the government is keen to sit down with the unions and talk about pay and make sure they understand where we’re coming from.”

The main opposition Labour Party has criticised the government’s refusal to discuss this year’s pay deal.

Deputy Labour leader Angela Rayner said: “Rishi Sunak is taking our nurses and ambulance workers for fools. These talks are about next year’s pay settlements and will do nothing to resolve today’s issues.”

But the Royal College of Nursing (RCN) expressed optimism over the government’s willingness to come to the negotiating table.

RCN general secretary Pat Cullen told the BBC, “The prime minister talked about coming to the table, now that’s a move for me because I have said, let’s meet halfway.”

“So if that table is now available, I will be there on behalf of the over 300,000 members that participated in this ballot. But it must be about addressing pay for 2022/23.”

NHS ‘On Its Face’

Labour leader Sir Keir Starmer has warned the NHS is “not just on its knees, it’s on its face,” with “7.2 million people on the waiting list.”

“Just at the moment we’ve got a crisis and it’s the worst crisis we’ve ever had and that’s because we’ve had 13 years of neglect. … Of course, COVID put extra pressure on the NHS … but the waiting lists were 4.6 million before we went in to COVID.”

Asked if the NHS was “in crisis,” the prime minister told the BBC on Jan. 7, “The NHS is undeniably under enormous pressure and I’ve spent today talking to NHS leaders.”

“Recovering from COVID is going to be tough and we’re seeing that play out on our TV screens every day and in communities up and down the country,” he said, “but actually I came away from all my meetings today with a renewed sense of confidence and optimism that we can get to grips with this problem.”