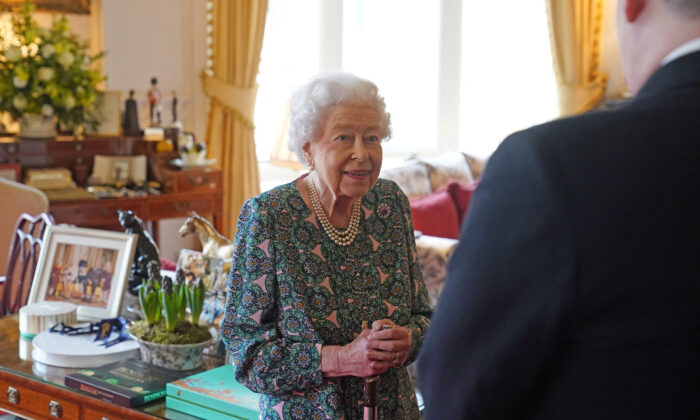 Queen Elizabeth II speaks during an audience where she met the incoming and outgoing Defence Service Secretaries at Windsor Castle in Windsor, Britain, on Feb. 16, 2022. (Steve Parsons/Pool/Reuters)
High-profile cases

The UK’s Queen Elizabeth II tested positive for COVID-19 on Feb. 20, two weeks after she celebrated her Platinum Jubilee for 70 years on the throne.

The 95-year-old monarch is experiencing mild cold-like symptoms, and she’s expected to continue carrying out “light duties” this week, according to Buckingham Palace.

The queen, who’s believed to have been vaccinated and boosted, reportedly met with Prince Charles on Feb. 8, two days before he tested positive for the CCP (Chinese Communist Party) virus, which causes COVID-19, for the second time.

Charles, the queen’s eldest son and heir to the throne, caught the virus in March 2020, but only had mild symptoms.

He also made a speedy full recovery this time. His wife, the 74-year-old Camilla, duchess of Cornwall, also tested positive, with Clarence House confirming on Feb. 14 that the duchess was self-isolating.

“The Queen has today tested positive for COVID,” Buckingham Palace stated on Feb. 20. “Her Majesty is experiencing mild cold-like symptoms but expects to continue light duties at Windsor over the coming week.

“She will continue to receive medical attention and will follow all appropriate guidelines.”

The Royal Household has its own physicians, and the queen’s doctors will be on hand to take care of the head of state, with professor Sir Huw Thomas, head of the Medical Household and physician to the queen, expected to be in charge.

The queen had previously been ordered by doctors to rest and only carry out light duties after she spent a night in the hospital in October 2021 for “preliminary investigations.”

UK Prime Minister Boris Johnson wished the queen “a swift recovery” from COVID-19 and “a rapid return to vibrant good health” on Twitter.

Also writing on Twitter, the opposition Labour Party leader Sir Keir Starmer wished the monarch “good health and a speedy recovery” on behalf of his party.

A number of other ministers and Deputy Speaker of the House of Commons Dame Eleanor Laing also took to Twitter to express their good wishes.

Earlier this month, the world’s oldest monarch celebrated the 70th anniversary of her accession to the British throne.

She’s the longest-reigning living monarch and the first British monarch in history to reach her Platinum Jubilee.

Her reign has stretched from the post-World War II years through a new millennium and into a radically altered 21st century, seeing 14 prime ministers from World War II leader Sir Winston Churchill to Boris Johnson.

In her twilight years, she has been setting her affairs in order, using her Jubilee message to endorse her daughter-in-law, the duchess of Cornwall, to be Queen Camilla and crowned at Charles’s side when he one day becomes king.

The queen is the latest monarch from around the world to catch the CCP virus. Queen Margrethe II of Denmark, 82, and Spain’s King Felipe VI, 54, both tested positive for the virus on Feb. 9.