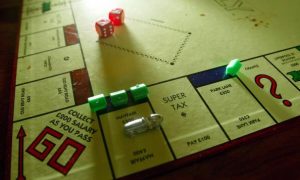 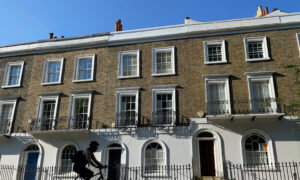 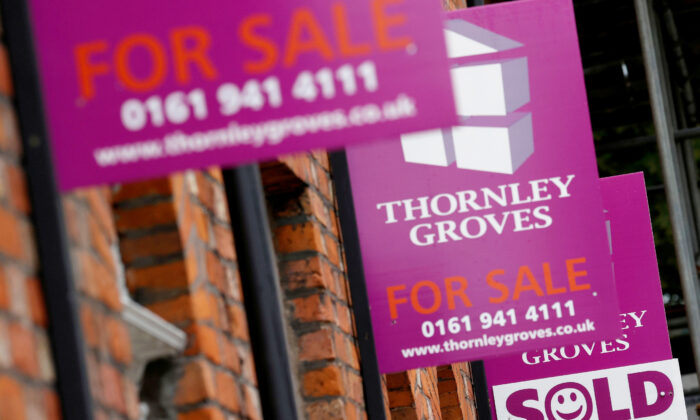 Estate agents boards are seen outside a row of terraced houses in Manchester, Britain, on July 8, 2020. (Phil Noble/Reuters)
UK

UK house prices that dipped in May and June have risen to an “all-time high” following the country’s easing out of lockdown, according to Nationwide, the world’s largest building society.

After a seasonal adjustment, house prices rose by 2 percent in August, after a 1.8 percent rise in July, Nationwide’s Chief Economist Robert Gardner said in a statement (pdf) on Wednesday.

The “unexpectedly rapid recovery” is the highest monthly rise in house prices since February 2004 when the rise was 2.7 percent, Gardner said.

Several factors have affected the recovery in Britain’s house prices, including dammed up demand from people who had already decided to move, but whose plans were put on hold during the lockdown that enacted to slow the spread of the CCP (Chinese Communist Party) virus, commonly known as the novel coronavirus.

People re-thinking their housing plans while in lockdown have also affected the upsurge in house prices. Nationwide research carried out in May showed that about 15 percent of those surveyed were thinking about moving due to the lockdown.

“Pent up demand is coming through, where decisions taken to move before lockdown are progressing,” Gardner said.

“Behavioral shifts may also be boosting activity, as people reassess their housing needs and preferences as a result of life in lockdown.”

Gardner also said the upward trend would continue in the near term in response to the stamp duty holiday, a tax break for home buyers recently announced by the government, which will encourage some people to buy now when they may have otherwise delayed purchasing property.

The Office for Budget Responsibility (OBR) in a July statement (pdf) also noted a bringing forward of housing market activity due to the stamp duty holiday, but with some transactions being real additions to normal levels.

“We would expect it to increase the number of property transactions in 2020–21 by around 100,000, with around a quarter of those being truly additional while three-quarters would be brought forward from 2021–22,” the OBR said.

Rightmove, the UK largest property marketplace, last week echoed the impact of the stamp duty holiday, which has boosted the market in southern England.

“We always knew that the stamp duty holiday was going to be a big incentive for people to get moving this year, and it’s certainly sparked a home-moving frenzy across commuter towns in the south of England,” Miles Shipside, Rightmove’s property expert, said in a statement.

An additional reason thousands of urban sellers are putting their properties up for sale is that many are looking to move to more rural areas and into homes with more outside space, Shipside said.

Being close to a train station has also become less important, as working from home has become a “more permanent way of life,” he said.

Estate agents have also noted the drivers of the upward trend in UK house buying activity.

Jake Latch, sales negotiator at Reyland Johnson Estate Agents, said in a statement that his company in Harlow, a commuter town north of London, has been “ridiculously busy over the past few weeks” due to people taking advantage of the stamp duty holiday and because they don’t have to commute into London anymore.

“The main thing we’ve seen is that people who were on the fence about moving before the stamp duty holiday have sat up and decided that this is their right time to move,” he said.

Glynis Frew, CEO of Hunters Estate Agents, said in a statement that the desirability of property in commuter towns because of their proximity to the capital has increased their value to be “slightly out of reach for many people.” But the stamp duty holiday has made the properties more affordable, “so it’s little surprise to see the markets hotting up as buyer budgets can go slightly further,” she said.

The upsurge in Britain’s house prices is unlikely to be sustainable, however.

“Most forecasters expect labor market conditions to weaken significantly in the quarters ahead as a result of the after-effects of the pandemic and as government support schemes wind down. If this comes to pass, it would likely dampen housing activity once again in the quarters ahead,” Nationwide’s Gardner said.