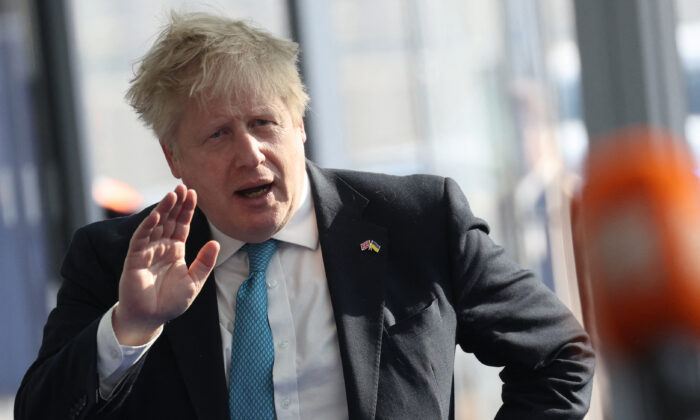 Banks, strategic industries, and a mercenary group that reportedly tried to assassinate Ukrainian President Volodymyr Zelenskyy have become the new targets of the UK’s Russian sanctions.

Rallying NATO leaders to ramp up support for Ukraine in Brussels on Thursday, British Prime Minister Boris Johnson announced the sanctions against 65 Russian, Ukrainian, and Belarusian individuals and entities, along with a new support package including 6,000 more missiles.

The UK government said it has sanctioned over 1,000 individuals and businesses under its Russian regime since the start of Russia’s invasion of Ukraine. Among them, 790 individuals and 39 entities were not previously on the UK’s sanctions list.

The FCDO said the Wagner Group, sanctioned on Thursday, is “the organisation [of] Russian mercenaries reportedly tasked with assassinating President Zelenskyy.”

The group is widely regarded as Russian President Vladimir Putin’s private army, which carries out Putin’s assassination orders while giving him plausible deniability—a connection the Kremlin has denied.

Russian Railways has also been targeted for “supporting Russia’s illegal invasion,” as well as defence companies including Kronshtadt, which the FCDO said is the main producer of Russian drones.

Others on the list include state-run shipping firm Sovcomflot; Alrosa, the world’s largest diamond producer with an estimated market value of $6.61 billion; and Polina Kovaleva, whom the FCDO said is Russian Foreign Minister Lavrov’s stepdaughter.

The FCDO said she reportedly owns a £4 million ($5.28) property in London, with property records showing she lives in the Kensington district, famous for its parks, upmarket shops, and museums.

She purchased it in 2016 without a mortgage, the records show.

Ukrainian national Galina Danilchenko is also sanctioned as the “Russian-installed ‘Acting Mayor’ of Melitopol,” the UK government said Danilchenko “provided support for and promoted policies and actions that threaten the territorial integrity, sovereignty, or independence of Ukraine, including through endorsing and acting in support of Russian occupation of Melitopol as part of efforts to normalise and provide legitimacy to it.”

This is the first time an individual has been sanctioned for collaboration with Russian forces currently in Ukraine.

Britain and other Western nations are using sanctions to cripple the Russian economy and punish President Vladimir Putin for invading Ukraine, seeking to press him to abandon what he calls a special military operation to demilitarise and “denazify” Ukraine.

Kyiv and its allies call it a baseless pretext to invade a democratic nation of 44 million people.

As Johnson announces the new package of support and sanctions, Russian state-owned RIA news agency quoted Kremlin spokesman Dmitry Peskov as saying the British prime minister is “the most active participant in the race to be anti-Russian.”

“The prime minister is among the most active anti-Putin leaders,” Johnson’s official spokesman said.

“We have no issue with the Russian people and in fact, we have seen many bravely protest—not least [jailed opposition leader] Alexei Navalny—against Putin’s regime and call on them to cease this war.”