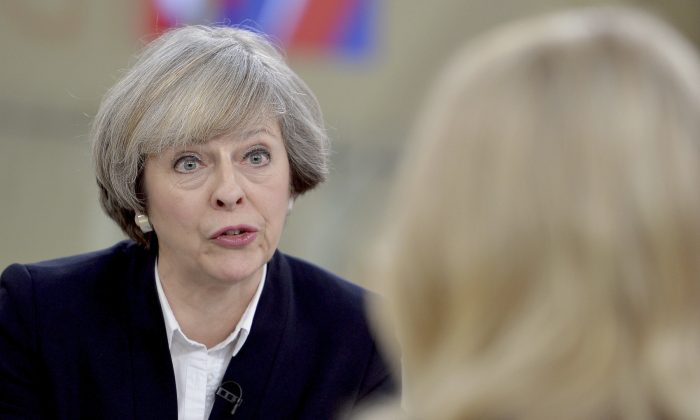 Britain's Prime Minister Theresa May, left, is interviewed by Sophy Ridge for a television channel, in London,on Jan. 8, 2017. (John Stillwell/PA via AP)
International

LONDON—Prime Minister Theresa May said Sunday she will announce details of Britain’s European Union exit plans in the next few weeks, and denied a former diplomat’s claim that the government is “muddled” about Brexit.

In her first interview of 2017, May also said Donald Trump had made “unacceptable” comments about women—but stressed she’s had “good” conversations with the U.S. president-elect about the vital trans-Atlantic relationship.

May has said for months that she will invoke Article 50 of the EU’s key treaty, triggering two years of EU exit talks, by March 31. But she has refused to reveal details of Britain’s goals or negotiating strategy.

May argues that to do so would weaken Britain’s hand, but the lack of detail has fueled allegations that government plans for Brexit are in disarray.

In an interview with Sky News, May insisted the government is “not at all” muddled.

“I will be setting out some more details in the coming weeks,” she said.

She signaled the U.K. is likely to leave the bloc’s single market in goods and services, saying Britain won’t try to keep “bits of membership” once it leaves.

Many U.K. businesses—especially in London’s huge financial-services sector—argue that access to the single market is vital. But EU leaders say membership is impossible unless Britain continues to allow the free movement of workers from other EU countries.

May said free movement would end because Britain has voted to take control of its borders. But she also said she did not see immigration and trade as “a binary issue” or “a zero-sum game.”

She said Britain would seek an “ambitious trade deal … that allows our companies to trade in and operate in the European single market.”

May, who took office in July, also faces the challenge in 2017 of forging a relationship with a new U.S. president.

The prime minister, a long-time campaigner for women’s equality, was asked about Trump’s vulgar 2005 remark.

“I think that’s unacceptable,” she said. “In fact, Donald Trump himself has said that and has apologized for it.

May’s top advisers have met Trump’s transition team, and the Foreign Office said Foreign Secretary Boris Johnson was in the U.S. on Sunday to meet “close advisers to the president-elect and senior Congressional leaders.”

May said she has had two “very good, positive” phone calls with Trump since the Nov. 8 U.S. election.

“From the conversations I’ve had, I think we are going to look to build on that relationship, for the benefit of both the U.S. and the U.K.,” she said.

Trump tweeted Sunday that “I look very much forward to meeting Prime Minister Theresa May in Washington in the Spring. Britain, a longtime U.S. ally, is very special!”

I look very much forward to meeting Prime Minister Theresa May in Washington in the Spring. Britain, a longtime U.S. ally, is very special!