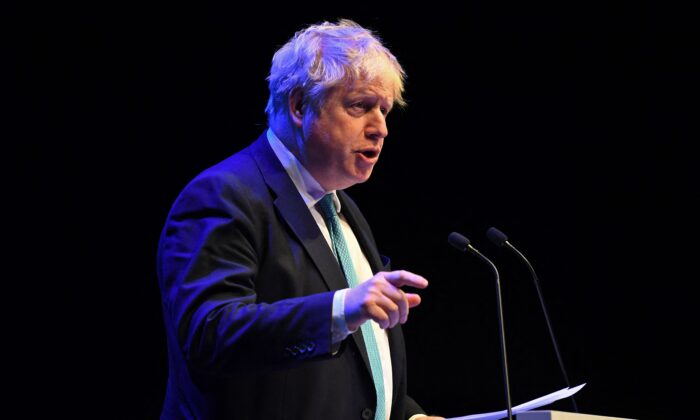 British Prime Minister Boris Johnson has called on the Chinese regime not to “condone” Russia’s invasion of Ukraine, which he described as a fight “between good and evil.”

In an interview with The Sunday Times, Johnson said: “As time goes on, and as the number of Russian atrocities mounts up, I think it becomes steadily more difficult and politically embarrassing for people either actively or passively to condone Putin’s invasion.

He said he thinks the Chinese Communist Party (CCP) is starting to have “second thoughts” over its stance on the war.

Johnson said he had “never seen such a stark division between good and evil.”

He said Russian President Vladimir Putin has been “trying to crush a blameless, innocent civilian population” and his “barbaric aggression … harked back to the darkest days of the Second World War.”

The prime minister said that “people’s understanding of what is happening is changing” as the conflict goes on.

He said: “I think that some countries began by thinking Putin’s war machine will go through like a knife through butter, that Kyiv will fall soon and it will be tragic, but it will be speedily accomplished.

“They have now been disabused of that idea. I think for a lot of people this has been a psychological shock. This has been a terrible realisation for people who may be living in a fool’s paradise. There’s going to have to be a new way of looking at nations like Russia.”

Latest Western intelligence suggest that the Chinese regime is far from just “sitting on the fence” over the war in Ukraine.

U.S. President Joe Biden had a two-hour video call with Chinese leader Xi Jinping on March 18, during which Biden warned Xi of “the implications and consequences if China provides material support to Russia.”

Xi and Putin declared a “no-limits” partnership in early February, less than three weeks before Moscow’s invasion. Since then, U.S. intelligence leaders have warned that cooperation between China and Russia would continue to grow in the coming decade, as the two nations seek to undermine the United States’ preeminence throughout the world.

Andrew Thornebrooke and PA Media contributed to this report.