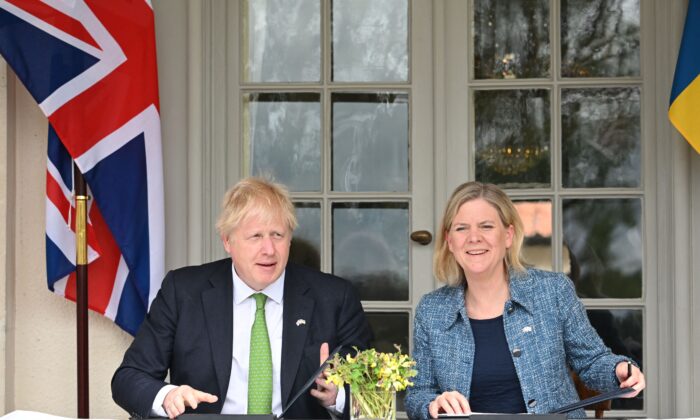 British Prime Minister Boris Johnson has pledged to support both Sweden and Finland should they come under attack, as he visits the two countries to sign historic declarations of security assurance.

Both countries are considering the prospect of joining the NATO military alliance following Russia’s invasion of Ukraine. Moscow has warned that the countries would face “serious military and political repercussions” if they joined.

Johnson arrived in Stockholm on May 11 and held talks with his Swedish counterpart, Magdalena Andersson, at her official country residence Harpsund, where they signed mutual security assurances.

Speaking at a joint press conference, Johnson said the agreement “enshrines the values that both Sweden and the UK hold dear, and which we will not hesitate to defend.”

He cited the Swedish-developed and British-built NLAW anti-tank weapons, which have been used by Ukrainian troops to destroy a large number of Russian tanks, as proof of effective defence cooperation between the UK and Sweden.

Andersson said she was “very happy” to sign the declaration of solidarity, which she said will make her country safer whether or not it eventually joins NATO.

The UK prime minister is set to visit Finland later in the day, where he is expected to formalise a similar security agreement with the country’s President Sauli Niinisto.

In a statement, Johnson said: “We are steadfast and unequivocal in our support to both Sweden and Finland and the signing of these security declarations is a symbol of the everlasting assurance between our nations.

“These are not a short term stop gap, but a long term commitment to bolster military ties and global stability, and fortify Europe’s defences for generations to come.”

The declarations will see a “step change” in defence and security cooperation between the UK and the two Nordic countries, the UK government said, adding that the three countries will intensify intelligence sharing, accelerate joint military training, exercising, and deployments.

The UK will also offer to increase military deployments to the region, including with Royal Air Force, British Army, and Royal Navy assets and personnel, the government said.

Support for joining NATO has risen sharply in both Sweden and Finland since Russia invaded Ukraine, despite their previous tradition of neutrality.

Johnson said it was “a matter for Sweden” whether it wants to join NATO, but he said the UK will support Sweden if it decides to apply for membership.

Andersson said Sweden is “exploring all possible options” and NATO is “one of them that is on the table.”