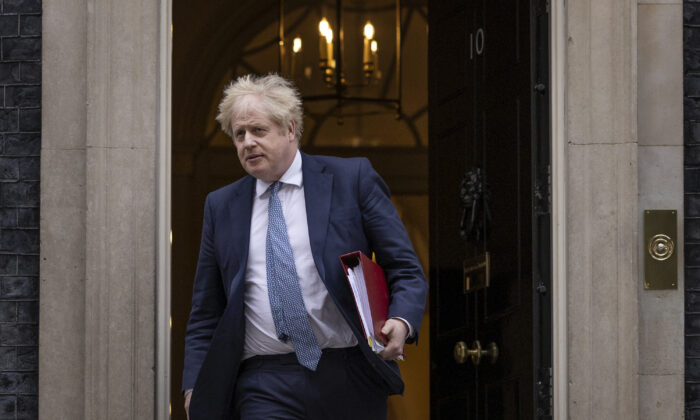 A vote of no confidence in Prime Minister Boris Johnson’s leadership is “inevitable,” a senior British Conservative lawmaker has said as the political crisis over the “partygate” scandal deepens further.

Johnson is facing calls to resign, from both opposition parties and his own MPs, following a series of damaging allegations of parties and other gatherings held in his official residence at Number 10 Downing Street and other government departments in Whitehall at the height of the CCP (Chinese Communist Party) virus pandemic, in violation of lockdown rules written by the government.

Tobias Ellwood, a Conservative former minister who now chairs the Defence Committee of the House of Commons, said on Feb. 2 that he has lost confidence in the prime minister and would submit a letter to the Conservative Party’s 1922 Committee of backbench MPs.

A vote of confidence will be triggered once the committee receives 54 letters from MPs expressing a lack of confidence in the prime minister.

“This is just horrible for all MPs to continuously have to defend this to the British public,” Ellwood told Sky News.

“I don’t think the prime minister realises how worried colleagues are in every corner of the party, backbenchers and ministers alike, that this is all only going one way and will invariably slide towards a very ugly place.”

Ellwood said it’s time for Johnson to “take a grip” and call a vote of confidence himself rather than “waiting for the inevitable 54 letters to be eventually submitted.”

“It’s time to resolve this completely so the party can get back to governing,” he said.

Anthony Mangnall, one of the 2019 intake of Conservative MPs, also confirmed that he wants a vote on the future of Johnson’s leadership, writing on Twitter that the prime minister’s behaviour was “overshadowing” good work elsewhere.

On Jan. 31, senior civil servant Sue Gray revealed that the Metropolitan Police were investigating 12 events held at the heart of the government for possible violations of lockdown rules.

One of the gatherings was held in Johnson’s Downing Street flat on Nov. 13, 2020, just days after his government put England under its second national lockdown, which prohibited gatherings with people from other households except for permitted exceptions, including for work purposes.

The Daily Telegraph reported that Johnson was seen heading up to the flat on the night when the gathering took place.

But at Prime Minister’s Questions in the House of Commons on Feb. 2, Johnson again refused to say whether he had been at the alleged party in his flat, telling MPs “the process must go on.”