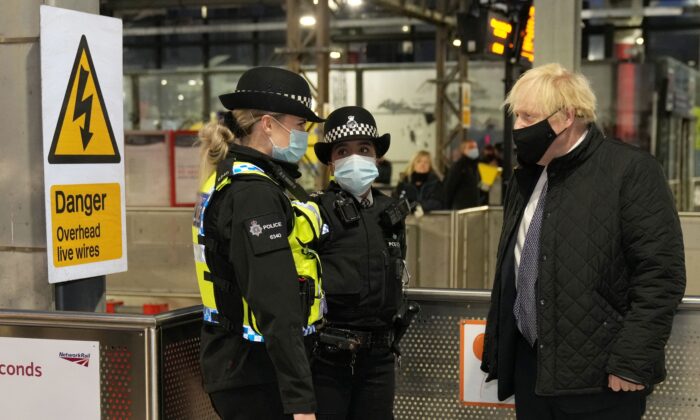 British Prime Minister Boris Johnson has defended the government’s decision to reintroduce travel restrictions to slow the spread of the Omicron COVID-19 variant, after scientists likened the move to “shutting the stable door after the horse has bolted.”

The government announced last week that all travellers arriving in England will be required to take a COVID-19 pre-departure test from Tuesday.

Eleven African countries have been added to the UK’s travel “red list,” meaning only British or Irish citizens and residents will be allowed to enter England if they have been to one of these countries in the past 10 days. Arrivals from these countries must stay for 10 days in hotel quarantine.

But professor Mark Woolhouse, a member of the Scientific Pandemic Influenza Group on Modelling (Spi-M), which advises the government, said the measures would not make a “material difference” as the variant is already “spreading pretty rapidly.”

“I think that may be a case of shutting the stable door after the horse has bolted,” he told BBC One’s “Andrew Marr Show” on Sunday.

Professor Paul Hunter, from the school of medicine at the University of East Anglia, told “BBC Breakfast” on Monday that travel restrictions would only have a minor impact. “Once the infection is spreading within a country, then border restrictions don’t really add anything,” he said.

He also said that travel restrictions “de-motivates other countries to actually be open about their own situations for fear of what they would see as economic sanctions.”

Visiting Merseyside on Monday, Johnson defended the travel curbs. He said: “I think what we’re doing is responding to the pandemic. We were the first country in the world to take decisive measures to tackle Omicron.”

“We are now going further and toughening those measures up as we see the spread of Omicron around the world,” he added.

But the prime minister said there is no need to “change the overall guidance and advice” in the UK in response to the spread of the new variant, because “we are still waiting to see exactly how dangerous it is, what sort of effect it has in terms of deaths and hospitalisations.”

The travel restrictions have been strongly criticised in the affected African countries.

On Monday, after Nigeria was added to the UK’s “red list,” the country’s high commissioner to London Sarafa Tunji Isola told the BBC that he agrees with the U.N. Secretary-General Antonio Guterres, who criticised the measures as “travel apartheid.”

The envoy said the spread of the Omicron variant should not be a “panicky situation,” as it is “classified as a mild variant—no hospitalisation, no death.”

“We understand the difficulties that’s created by these travel restrictions, but we’re trying to buy a little bit of time so that our scientists at Porton Down can work on the virus and assess how difficult it’s going to be for us to cope with as a country,” he told BBC Radio 4’s “Today” programme.