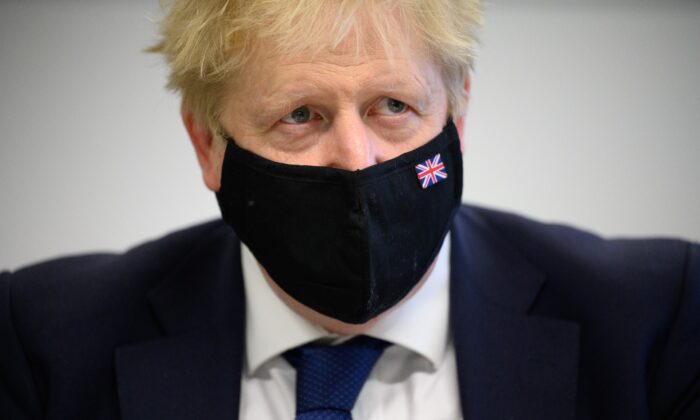 Britain's Prime Minister Boris Johnson speaks with pupils in a maths class as he makes a constituency visit to Oakwood School in Uxbridge, England, on Jan. 10, 2022. (Leon Neal/Getty Images)
UK

British Prime Minister Boris Johnson is facing a barrage of criticism after new revelations emerged about yet another party held in Downing Street during the COVID-19 lockdown.

According to UK media reports, Martin Reynolds, the prime minister’s principal private secretary, sent an email in May 2020 to more than 100 Downing Street employees inviting them to a garden party.

The leaked email, obtained by ITV News, said: “Hi all, after what has been an incredibly busy period we thought it would be nice to make the most of the lovely weather and have some socially distanced drinks in the No 10 garden this evening. Please join us from 6pm and bring your own booze!”

At the time, England was under strict CCP (Chinese Communist Party) virus restrictions, under which groups were banned from meeting socially outdoors.

Multiple reports have suggested Johnson himself attended the event with his wife, Carrie Johnson, though he sidestepped questions on Monday about whether he was present at the gathering.

Labour leader Sir Keir Starmer said: “Boris Johnson, your deflections and distractions are absurd. Not only did you know about the parties in Downing Street, you attended them. Stop lying to the British public. It’s time to finally come clean.”

The Liberal Democrats said if rules are found to have been broken then “those responsible should face the full force of the law.”

The party’s home affairs spokesperson Alistair Carmichael said: “Boris Johnson himself said just days after this party that the police should step in to stop people holding outdoor gatherings. It would absolutely reek of double standards if the police don’t investigate these allegations in full.”

The COVID-19 Bereaved Families for Justice group said if the prime minister attended the alleged Downing Street party in May 2020 then his position would be “untenable” and he would have “lost all moral authority to lead the country.”

The Metropolitan Police said it is in contact with the government over the allegations.

“The Metropolitan Police Service is aware of widespread reporting relating to alleged breaches of the Health Protection Regulations at Downing Street on May 20 2020 and is in contact with the Cabinet Office,” a spokesman said.

Downing Street said it would not be commenting on the allegations while Sue Gray, a senior civil servant, carries out her inquiry into numerous allegations of rule-breaking events being held in Downing Street during the pandemic.