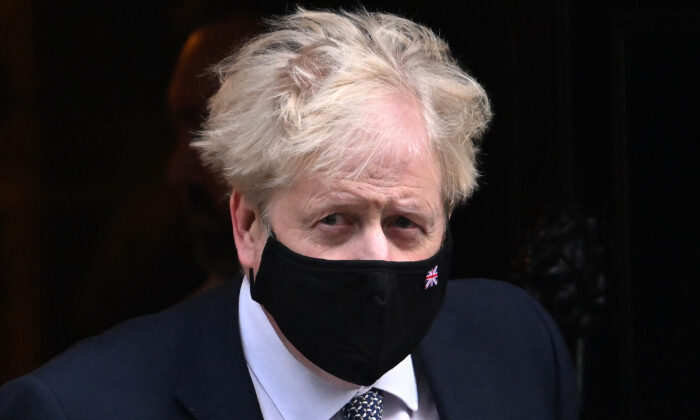 British Prime Minister Boris Johnson has apologised for attending a social gathering in the Downing Street garden during England’s first COVID-19 lockdown, though he refused to admit he broke lockdown rules.

According to UK media reports, Martin Reynolds, Johnson’s principal private secretary, sent an email in May 2020 to more than 100 Downing Street employees inviting them to a garden party and asking them to “bring your own booze.”

Johnson himself and his wife Carrie were reportedly among about 30 people who attended the gathering on May 20, 2020, when England was under strict CCP (Chinese Communist Party) virus restrictions banning groups from meeting socially outdoors.

At the Prime Minister’s Questions in the House of Commons on Jan. 12, Johnson acknowledged the public “rage” over the incident, but insisted it “could be said technically to fall within the guidance.”

He said he attended the gathering for around 25 minutes to “thank groups of staff,” as he “believed implicitly that this was a work event.”

“With hindsight I should have sent everyone back inside, I should have found some other way to thank them, and I should have recognised that—even if it could have been said technically to fall within the guidance—there would be millions and millions of people who simply would not see it that way.”

Johnson offered his “heartfelt apologies” to Parliament and “people who have suffered terribly, people who were forbidden for meeting loved ones at all inside or outside.”

Opposition party leaders called on the prime minister to resign.

Labour leader Sir Keir Starmer said Johnson had “run out of road” after “months of deceit and deception.”

He said the prime minister’s defence “that he didn’t realise he was at a party is so ridiculous that it’s actually offensive to the British public.”

Starmer said “the party’s over” and “the only question is will the British public kick him out, will his party kick him out, or will he do the decent thing and resign.”

Johnson replied that Starmer should wait for the conclusion of an investigation being conducted by senior civil servant Sue Gray on a series of reported parties in Downing Street and elsewhere in Whitehall during the lockdown.

Johnson has also faced growing anger within his own party, with Scottish Conservative leader Douglas Ross saying on Jan. 11 that the prime minister should resign if he is found to have deliberately misled Parliament.

Cabinet minister Simon Hart acknowledged there is “a lot of frustration and bafflement” over the “partygate” row.

“I’ve not met anybody who is not deeply, deeply conscious of the effect that this has on people’s attitudes to not just the political party … but the government and the smooth running of the nation,” the Welsh secretary told reporters on Jan. 12.