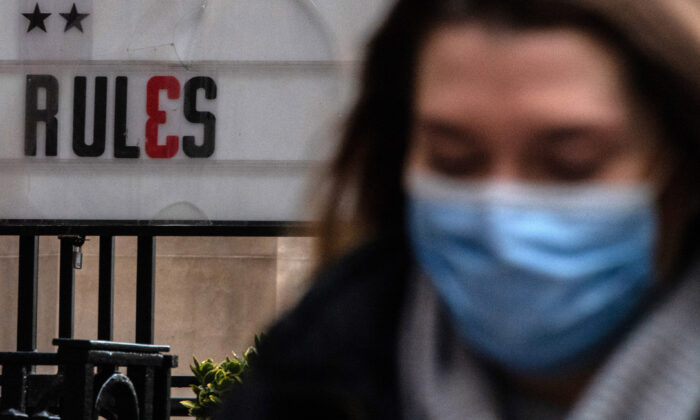 Commuters wearing masks walk past a sign outside a bar in the city of London on Dec. 9, 2021. (Chris J Ratcliffe/Getty Images)
UK

The South African doctor who alerted the world about Omicron said the UK government should “stay calm” as she described its handling of the new CCP virus variant as verging on “hysteria.”

It comes as Parliament is due to vote on measures including mask mandate, self-isolation rules, and COVID-19 passes on Tuesday, and amid rumors of a New Year lockdown.

In an article published in the Daily Mail on Monday, Dr. Angelique Coetzee, chair of the South African Medical Association, said the UK government’s handling of Omicron infections “verges on hysteria.”

The veteran general practitioner said the Omicron patients in South Africa typically had mild symptoms such as “muscle pain, body aches, a headache, and a bit of fatigue” that clear up after about five days.

“My first Omicron case, a young man who came into my surgery, initially thought he had been in the sun too long after working outside,” Coetzee wrote.

Coetzee wrote that most people who contracted Omicron in South Africa are unvaccinated as the country has a full vaccination rate of 26 percent.

She suggested Prime Minister Boris Johnson and his ministers should “stay calm” and not overreact, as she argued that “we will need all the help we can get from such natural immunity” from the generally mild Omicron infections in case the next variant is “slower spreading but more severe.”

Around 81 percent of the UK’s population aged 12 and over has had two doses of CCP (Chinese Communist Party) virus vaccines, and 40.3 percent has had a booster dose.

The UK government is putting enormous resources behind jabbing the population with booster doses, arguing it’s the best way to defend people against the Omicron variant.

According to the UK’s Health Security Agency (UKHSA), 10 people aged between 18 and 85 in England have been hospitalised with the Omicron variant, and most of them have had two doses of CCP virus vaccines.

The agency said these individuals were diagnosed with COVID-19 on or before admission. But no information was released on the one patient that died with Omicron.

The new restrictions in England are expected to pass in Parliament with the support from the Labour Party, but Johnson is likely to face the biggest rebellion during his premiership from Conservative backbenchers, many of whom argued the measures are not justified without solid data.

The UKHSA didn’t respond to The Epoch Times’ request for comment.