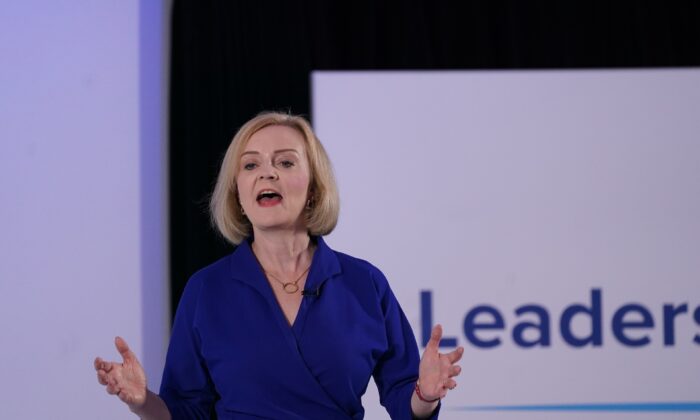 Foreign Secretary Liz Truss has said the UK’s response to the COVID-19 pandemic was “too draconian” and that she would “never impose a lockdown” if she becomes prime minister.

Truss, the frontrunner in the race to replace Boris Johnson as Conservative Party leader and prime minister, said she questioned the lockdown measures though she was not on the committee making the decisions on the response to COVID-19.

Speaking at the penultimate leadership contest hustings, held in Norwich on Aug. 25, she said: “I think when COVID happened we were all hugely shocked. And there was a discussion about what the response should be. And clearly, in retrospect, we did do too much. You know, it was too draconian.”

“I don’t think we should have closed schools,” she added.

Truss said she had been one of the key voices around the Cabinet table arguing in favour of easing lockdowns.

“My view is we did go too far, particularly on keeping schools closed,” she said. “I’ve got two teenage daughters and know how difficult it was for children and parents and I would not have a lockdown again.”

She told the audience: “I can assure you and this group here today that I would never impose a lockdown if I am selected as prime minister.”

‘Lessons We Should Learn’

It comes after her rival Rishi Sunak claimed in a Spectator interview he had often been the sole critic of government decision-making during the pandemic.

The former chancellor said the government never properly examined the likely side-effects of the drastic measures despite plunging the country into three national lockdowns.

He said one of the government’s biggest mistakes was giving too much power to scientists and claimed the government’s Scientific Advisory Group for Emergencies (SAGE) edited its minutes to hide dissenting opinions.

Asked about this at the Norwich hustings, Sunak said he had been talking about the “lessons we should learn” from the pandemic.

“This is not to second guess the decisions we made at the time, which were extraordinarily difficult for everyone involved,” he said.

“Everyone was doing their absolute best at the time to do what they thought was right for the country. These were impossible decisions. But what I was talking about was having now been through it and had the experience of it, what can we learn from it?”

Commenting on Sunak’s interview, Fraser Nelson, the editor of The Spectator, wrote in The Daily Telegraph: “An autocratic streak took hold of the government and overpowered a weak prime minister—and did so because our democratic safeguards failed.”

But some of those who participated in government decision-making at the time rejected Sunak’s version of events.

Boris Johnson’s former communications chief, Lee Cain, said: “It would have been morally irresponsible of the government not to implement lockdown in spring 2020—the failure to do so would have killed tens of thousands of people who survived COVID.”

Cain said Number 10, the Treasury, and the Department of Health and Social Care “met multiple times daily and discussed the trade-offs.”

A Number 10 spokesman said: “At every point, ministers made collective decisions which considered a wide range of expert advice available at the time in order to protect public health.”