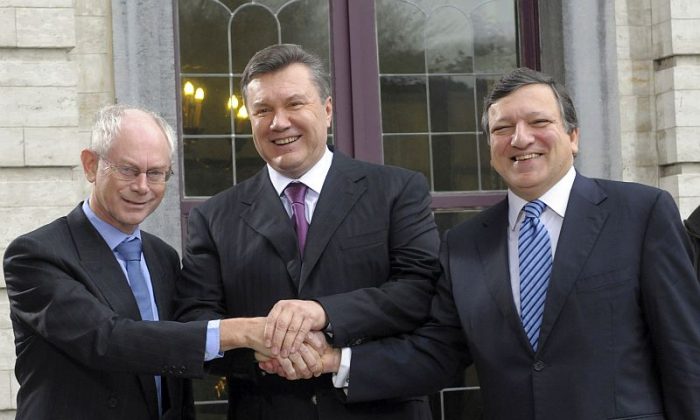 KYIV, Ukraine—Ukrainians often find it difficult to get visas for travel in Europe Union countries. Visa requirements could be waived—if the Ukrainian government makes reforms.

The European Union (EU) set requirements three years ago for all countries requesting visa-free travel for their citizens. The requirements are divided into two stages: legislation and implementation.

Neighboring Moldova needed to make almost the same reforms as Ukraine in the same amount of time. It completed the legislation stage last summer. Europe Without Borders has monitored Ukraine’s progress, and says it lags far behind, with less than half of the reforms completed.

Iryna Herashchenko, deputy head of the parliamentary committee on Euro-integration, says the ruling Party of Regions doesn’t have enough votes in Parliament to effect the reforms, even if it wanted to—and she’s not so sure it does.

“Obviously, without consolidation of authorities and opposition efforts, it will be impossible to adopt these laws,” she says.

And, adopting the laws will mean cutting back on corruption, says Herashchenko, a member of the opposition party Ukrainian Democratic Alliance for Reforms.

According to the 2012 Transparency International report, Ukraine ranks 144 out of 176 on the corruption perceptions index, with one being the least corrupt and 176 the most corrupt.

“Nearly one-third—100 billion hryvnas [US$12.51 billion]—which was at disposal of state and municipal enterprises, in fact went to a shadow economy,” he says.

Herashchenko says the government will resist the EU requirements that relate to transparency. Ukrainian President Viktor Yanukovych said back in 2011 that the “administration of Ukraine will do everything possible in order to fulfill the plan regarding adoption of visa-free regime,” according to local publication Dzerkalo Tyzhnya.

Iryna Sushko, head of Europe Without Barriers, says Ukraine may be behind enacting the reforms, but it could still get them in place in time for the Eastern Partnership Summit that will be held in November this year.

Ukrainian authorities would need to submit a report about their implementation plan by June to give the European Commission two to three months to prepare its own report.

The Europe Without Borders website shows by color coding how far Ukraine has progressed on reforms. Green shows tasks that are complete, yellow shows those that are in the process of being implemented, and red shows tasks not yet started. As of April 29, there were 26 green, 33 yellow, and no red.

In 2005, Ukraine enacted legislation that allows citizens of EU countries to enter the country without visas. Until Ukraine makes the necessary reforms, however, Ukrainians will have to continue to apply for visas, sometimes paying commercial websites like shengenvisa.com.ua to help navigate the application process.