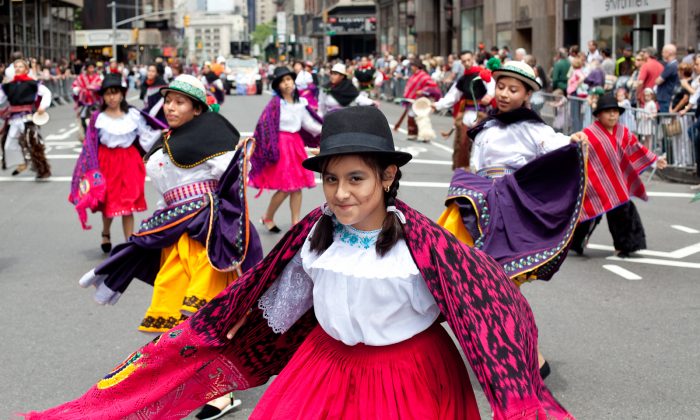 Dancers in previous dance parades. New York City’s Dance Parade will celebrate its eighth year Saturday, May 17, with over 70 styles of dance and more than 9,000 dancers. (J. Woodford)
New York

New York City’s Dance Parade will celebrate its eighth year Saturday, May 17, with over 70 styles of dance and more than 9,000 dancers.

The parade will start at 21st Street and Broadway at 1 p.m. and end in Tomkins Square Park at 3 p.m. where the dancing will continue. Free dance classes will be offered until 7 p.m. Everything is free and open to the public.

A group of Ukrainian dancers will lead the parade, showcasing the diversity of styles within Ukraine in contrast to the political upheaval that has upset the country since last November.

“We would like to bring you a face of Ukrainian culture that you don’t see on the news these days,” said Andrij Cybyk, executive director of Iskra Ukrainian Dance Ensemble. “Through dance, you can get to understand the soul of a culture, and that’s what we’re bringing, the soul of our people so you can understand us.”

Every year the number of Dance Parade participants grows. Last year there were about 60 dance styles compared with over 75 styles expected this year.

Joining for the first time will be a group called Momz in Da Hood, a group of women in their 50s who are hip-hop and breakdance artists. Besides dancing in the parade, they have been charged with making sure everyone is having fun.

“We’ve been asked by the Dance Police organization to come and serve as New York Dance Police,” said Barbara Adler, a 53-year-old member of Momz in Da Hood. “We’re going to be issuing summonses to people who are not having a good time.”

She will judge that, she said, by how much a person is smiling, laughing, and dancing.