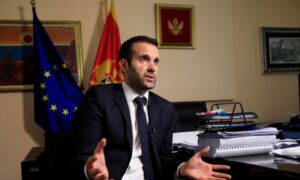 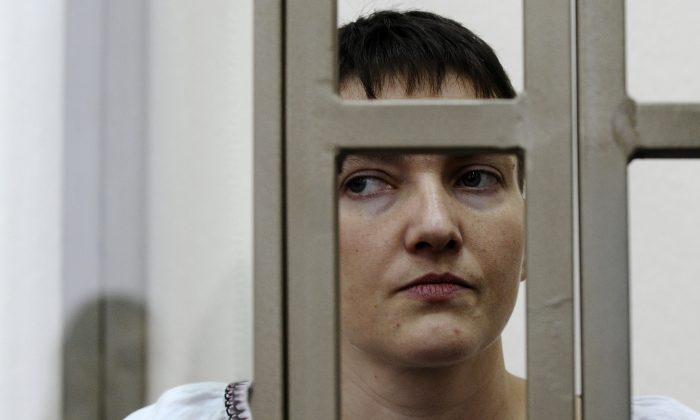 Ukrainian jailed military officer Nadezhda Savchenko stands in a glass cage during a trial in the town of Donetsk, Rostov-on-Don region, Russia, on March 3, 2016. Savchenko, a Ukrainian pilot on trial in Russia says she is going on hunger strike. Nadezhda Savchenko, on trial in the Russian border town of Donetsk for her alleged involvement in the deaths of two Russian journalists, was fighting in a volunteer battalion against Russia-backed separatists in eastern Ukraine when she was captured in June 2014. (AP Photo)
Europe

KIEV, Ukraine—About 2,000 people rallied on Independence Square in Kiev on Sunday to demand that Russia release Ukrainian pilot Nadezhda Savchenko, with hundreds then marching to the Russian Embassy to vent their anger.

Savchenko was captured in June 2014 while fighting with a Ukrainian volunteer battalion against Russia-backed rebels in eastern Ukraine. She is now on trial in Russia, accused of acting as a spotter who called in coordinates for a mortar attack that killed two Russian journalists and several other civilians.

After Sunday’s rally, several hundred protesters reached the Russian Embassy, where they chanted “Shame on Russia” and “Freedom to Savchenko,” embassy spokesman Oleg Grishin told the Interfax news agency. Some of the protesters pelted the building with eggs, he said.

On Saturday night, the Russian Embassy said it was attacked by men armed with baseball bats and who were wearing camouflage and ski masks. The assailants badly damaged three embassy vehicles and threw smoke bombs. Grishin said the embassy sent a formal note of protest to the Ukrainian Foreign Ministry.

Savchenko declared a hunger strike on Thursday after the judge adjourned the trial for a week and didn’t allow her to give her final statement. Her sister, Vera Savchenko, said at the rally they are monitoring her condition.

Prosecutors have asked for Savchenko to be found guilty and sentenced to 23 years in prison.

However Annoying Russia Is, Failure to Engage Is Not an Option
TOP NEWS