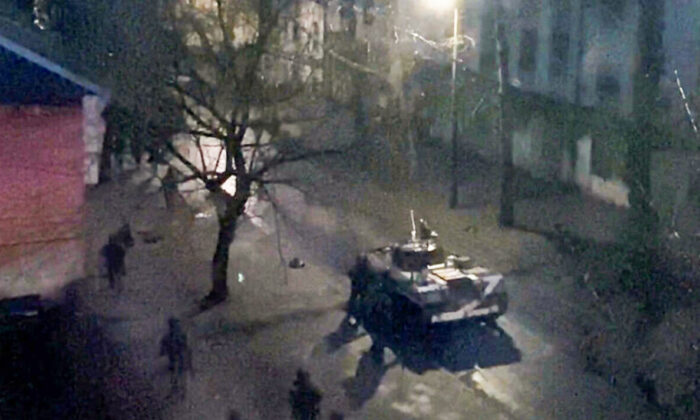 A military tank is seen on a street of Kherson, Ukraine, on March 1, 2022. (Screenshot via Reuters)
Russia-Ukraine War

Protests have broken out against Russian occupation in the port city of Kherson, the only major city in Ukraine seized by invading forces thus far in the war.

Thousands of people marched in Kherson on Saturday, according to posts on Twitter and media reports, with demonstrators young and old seen waving Ukrainian flags, singing the national anthem, and chanting slogans like “Russians go home.”

Ukraine’s Foreign Minister Dmytro Kuleba shared a video of the protesters on Twitter, saying that their bravery in the face of armed Russian invaders was an inspiration for the rest of the world.

“Thousands of peaceful Ukrainians protest Russian occupation in front of armed Russian soldiers. What a spirit. I call on everyone around the globe: express your support for the fearless Ukrainians in Kherson!” he wrote.

Courageous Kherson inspires Ukraine and the world! Thousands of peaceful Ukrainians protest Russian occupation in front of armed Russian soldiers. What a spirit. I call on everyone around the globe: express your support for the fearless Ukrainians in Kherson! #CourageousKherson pic.twitter.com/olZoMs6ebm

Harrowing footage purportedly from Kherson and shared on Twitter showed a protester lying on the road blocking the advance of a column of Russian military vehicles, with a crowd of unarmed demonstrators shouting at Russian soldiers to go home.

Gunfire rang out at one point as Russian soldiers tried to get the crowd to move aside, but the brave protesters refused to budge.

Incredible footage purportedly from Kherson showing local civilians very literally putting their bodies in the path of occupying Russian forces. Even at oncoming trucks and gunfire (into the air, it seems), they do not budge. https://t.co/VMpis2pdqG pic.twitter.com/egkOQpGIhD

Footage said to be from Kherson shared on Twitter showed a young woman draped in a Ukrainian flag, looking into the camera and saying, “We’re not afraid!” and “Kherson is Ukraine!”

Gunfire rang out repeatedly as she spoke but the crowd around her held its ground.

Another video said to be from Kherson showed what appeared to be a Russian tank that had been seized by Ukrainians rolling along a city street, with someone on top of it waving a Ukrainian flag as onlookers cheered.

Kherson resident Yevhen told BBC that the people taking to the streets on the tenth day of the invasion were demonstrating for Ukraine’s independence and standing up for their freedoms.

“Every night we hear about six or 10 explosions. It sounds like mortars. We don’t know who is bombing whom,” he told the outlet.

“We are trying not to go outside because Russian troops are stopping cars, checking what is in the cars. They are even checking phones, searching for evidence of helping the Ukrainian army,” he added.

Polish Gen. Waldemar Skrzypczak told Polish outlet Radio WNET in an interview Saturday that the strength of the Kherson protests reflects an erosion of Russian soldiers’ will to continue their offensive.

“The Russian army doesn’t want to fight,” he said. “Russian elite units are probably going to continue to fight, they’re motivated, but the regular army, its mechanized infantry units, they don’t want to fight anymore.”

“It’s not even a loss of morale—they’ve just lost the will to fight and kill civilians. They’ve been given orders to shoot civilians, open fire on civilians, they’re allowed to loot shops and commit acts of rape—but this army has simply lost its desire to stay in the fight.”

“They don’t see any point,” he continued, suggesting that the regular Russian army units view this campaign as “brutal and cruel” and they see the Ukrainians as people much like themselves.

Saturday marked the tenth day of the invasion, which has cost over 10,000 Russian soldiers their lives, according to the Ukrainian Defense Council. The Russian side has said 498 of its service members have been killed.

The assault on Ukraine has led to a massive humanitarian crisis, with 1.3 million people having fled the hostilities as of March 5, according to the U.N.