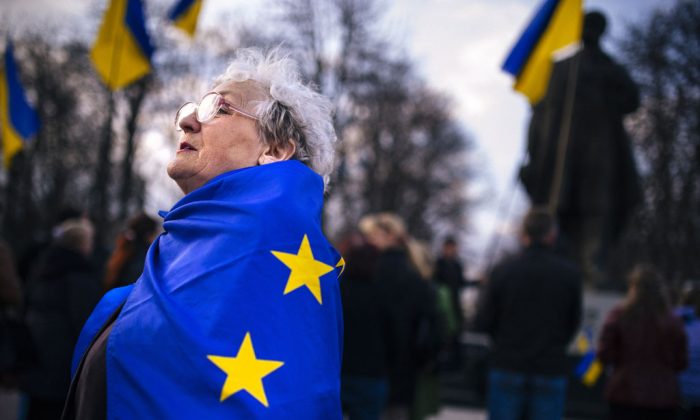 An elderly woman wrapped with an European Union flag attends a pro-Ukraine rally in the eastern Ukrainian city of Lugansk on April 15, 2014. Russia's foreign minister on April 15 warned Kyiv against using force to quell pro-Moscow separatists in eastern Ukraine, saying the "criminal" act would undermine talks planned in Geneva. Ukraine's Western-backed leader on April 15 accused Russia of trying to enflame the country's southeast but said he would proceed cautiously against pro-Kremlin militias consolidating control in the volatile region. (Dimitar Dilkoff/AFP/Getty Images)
Crisis in Ukraine

Kyiv is fighting to regain control over the eastern region of Ukraine, with news of troop buildups and tense standoffs with protesters. The occupation of government buildings in cities across the Donetsk region over the weekend by local pro-Russian supporters, apparently aided by Russian special forces, is naturally reminiscent of Crimea—but there are important differences between the two regions.

In the 1991 Ukrainian independence referendum, 84 percent of the Donetsk region voted in favor of independence for Ukraine, compared to only 54 percent in Crimea. According to the 2001 census, 38 percent of people in Donetsk region self-identified themselves as ethnically Russian, compared to 58 percent in Crimea. Unlike in Donetsk, up to 25,000 Russian armed personnel were stationed in bases in Crimea.

In contrast, a potentially powerful local economic and political elite exists in the Donbas. The balance of political and economic forces there is simply too complex and too confusing for a rapid resolution of the region’s status; instead, it will be played out over the coming months in finely balanced judgments by key actors all trying to safeguard their interests.

While the unrest has not yet triggered a revolution in the region, that cannot be ruled out. The joint regional state administration and regional council building in central Donetsk, the security service building in Luhansk, and government buildings across ten or so cities are occupied by a relatively small number of armed pro-Russian protesters. Judging by their determination and the size of the barricades they have built, the occupiers have plainly learned from the revolutionaries in Maidan. That the unrest has so far not resonated with the wider population is down to the movement’s lack of understandable objectives and credible leaders, not public opinion.

Nevertheless, the pro-Russian protesters are in a strong position in the region. The Kyiv authorities have issued several ultimatums to them to cease their occupations and threatened “counter-terrorist” operations involving the army, but so far they have been unable to exert authority over the region. The interim president’s unrealistic call for U.N. peacekeepers to be sent to east Ukraine seems like an admission of his lack of power. More pertinently, he has raised the prospect of holding a national referendum on a new constitution that would devolve power to the regions. But there is a widespread view in the Donbas that regional councils should be allowed to hold local referendum prior to the snap presidential poll on 25 May. Whatever transpires, it seems increasingly likely that the presidential election will not include some eastern regions.

As in Crimea immediately after the toppling of Viktor Yanukovych, there is currently a volatile political vacuum in the Donbas. The homegrown pro-Russian movement (with its Russian support) is currently filling the void. The Party of the Regions of Ukraine (PRU) was effectively decapitated when Yanukoyvch and his coterie fled the country; it is divided nationally over the selection of the former governor of Kharkiv, Mykhailo Dobkin, as its official presidential candidate.

Dobkin, who polled less than 4 percent in a recent opinion poll, appears to have been selected over the more popular billionaire Serhiy Tihipko because of Dobkin’s close association with the tycoon Rinat Akhmetov, a major party supporter.

Battle of the Oligarchs

The PRU is also divided locally in the Donetsk region. Following the collapse of the Yanukovych government, former governor Andrei Shishatskiy was elected head of the regional council. He subsequently resigned his membership of PRU and remained in office as an independent. Under Shishatskiy, the regional council drafted an appeal to the parliament in Kyiv demanding a referendum in the region, and the devolution of powers to regional and local government.

This appeal was held up as evidence of support by the pro-Russian movement, and was removed from the council’s website. The head of the regional branch of the PRU then tried and failed to unseat Shishatskiy as head of the council. On Friday Prime Minister Arseniy Yatsenyuk travelled to Donetsk to meet with the local political and economic elite but refused to grant permission for a local referendum on the region’s status. The following day there was an upsurge in pro-Russian protests across the region.

The local political elite do not seem to have an agreed position on what the Donbas-Kyiv relationship should be; nor can they agree how bold their demands for regional autonomy should be. The pro-Russian movement makes it difficult for the local elite to articulate the case for autonomy within Ukraine without playing into the hands of Russia and the local separatist minority.

Rinat Akhmetov is either reluctant or unable to make a decisive intervention to unite the local elite around a clear agenda. To date, he has publicly supported a united Ukraine, reasoning that this is his best way of retaining his assets, which are spread around the country. However, he may start to worry about losing his assets if the new government adopts a policy of renationalization, to fear for his safety after the arrest of the pro-Russian tycoon Dimitri Firtash (who is currently on bail in Austria and facing extradition to the US for corruption), or to fret that a genuinely popular revolution in the region will threaten his interests. He may conclude that the best way to hold on to as much of his vast fortune as possible could be the establishment of an autonomous south-eastern republic—or even unity with Russia.

Either way, public opinion in the region will be crucial. An opinion poll by the Donetsk Institute of Social Research and Policy Analysis published on 9 April found more than 80 percent wanted to see some kind of change in the region’s status and/or its relations with Kyiv. Almost 32 percent demanded greater economic and fiscal decentralization for the region within a unitary Ukrainian state, while a further 15.5 percent wanted federalization within Ukraine. The poll also revealed that around 32 percent wanted some form of independence or unity with Russia.

This means that a sizable constituency, around 47 percent, would like to see either independence, unity with Russia, or federalism. What remains to be seen is whether some mainstream, credible leader can assemble a political machine to harness and mobilize this constituency—or whether the relatively small numbers of Russian-backed protesters holding government buildings across the region will continue to dictate events. Either way, Kyiv has clearly lost control of the Donbas. The only question is whether the region will become a disputed autonomous territory under Russian protection—or whether, like Crimea, it will formally unite with its large neighbor.